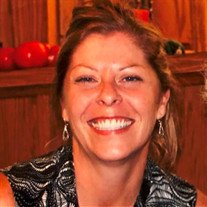 Mrs. Heidi Christopher Hughes, 49, passed away Sunday, March 8, 2020, at Methodist Hospice Residence in Memphis, TN. A private family memorial service will be held at a later date. Coleman Funeral Home of Olive Branch is in charge of arrangements.

Mrs. Hughes was born October 25, 1970, where she grew up on her family’s farm. She was raised as a true country girl, and she loved anything and everything outdoors. However, her favorite thing was spending time traveling and hunting with her husband. She was also so proud to be a part of her family at Methodist University Hospital and Methodist Olive Branch Hospital. She worked there for over 20 years as a registered nurse. Above all, she never took a thing in this life for granted, and she enjoyed nothing more than being at home with her husband and her family of beloved pets.

Donations and memorials in honor of Mrs. Heidi Hughes in lieu of flowers may be made to the National Wild Turkey Federation (your.nwtf.org/donate).

Online condolences may be left on the Tribute Wall at www.colemanfuneralhome.com.