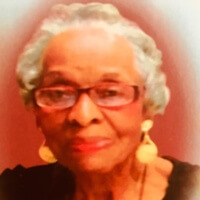 Ruby Ella T. Kirk passed away on August 21, 2018 in Roscoe, Illinois after an extended illness. A lifelong Okolona, Mississippi resident, she lived in Roscoe the last few years of her life with her daughter and son-in-law, Freddie and Memory Wright, who became her caregivers. November 23, 1921 was a very special day in the lives of Fred and Ruby M. Thompson, because their second daughter, Ruby Ella, was born in Okolona Mississippi, and for the next 96 years, her family and the community in East Chickasaw County felt her presence.

Blessed to become a Christian at an early age, Ruby’s influence was good and always positive. She became an active participant at the First Calvary Baptist Church. She continued her Christian journey there until her passing. Ruby was educated in the Okolona Public School system and perfected her remarkable hairstyling skills at Madam Walker Beauty College in St. Louis, Missouri. Ruby became the wife of Ambrose Kirk, Sr., an outstanding educator in Northeast Mississippi. They were the parents of two daughters and one son. She was preceded in death by her older daughter, Vera; her parents, Fred and Ruby Thompson; two brothers, Hubert and Fred Thompson; one sister, Mary Louise Thompson; grandson, Steven Kirk; and her husband, Ambrose, Sr.

For about six decades, at various times, Ruby provided loving and attentive care to her mother, mother-in-law, brothers, a sister and six others before their passing, while also doing creative hair styles for clients like Kay Jernigan, who loved not only her work but also her outgoing personality. Daily activities sometimes included keeping the children of friends. Today those children are productive Christian adults who can be found from coast to coast. A few answer to the names Nita, Beverly, Cathy, Debra, Gilliam family and others. Add to that, preparing meals, administering medication, providing transportation to doctor visits, supporting school projects and still making time for the National Council of Negro Women (life and charter member of the Okolona section), the church missionary women, NAACP, Parakeets Club and the Tupelo Beautician Association. Ruby’s departure has left a void in the lives of her family and friends.

To send a flower arrangement to the family of Ruby Ella T. Kirk, please click here to visit our Sympathy Store.