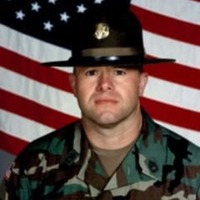 He was born on October 17, 1966, in Louisville, MS the son of the late Mr. David Chambliss and Mrs. Rita Hood (Bobby). He graduated from Nanih Waiya High School in 1985. He proudly played football and baseball in high school and was a member of a group called “The Brotherhood.” He loved his friends and shared fond memories of those times with his family. He graduated from Mississippi State University where he received his master’s degree in civil engineering. He was a member of the Army National Guard 155th Calvary Unit in Louisville, MS, then joined 3rd Brigade 87th Division Unit Hattiesburg, MS and retired at 21 years having been a Drill Sargent in the 3rd Battalion 323 D Regiment.
He moved to Villa Rica, GA with his family while being employed with Georgia Pacific, continued his environmental career with GE Water, which merged to Suez Water.

In addition to his father, he was preceded in death by his grandparents, Charles and Jewel Chambliss; Louis and Georgie Alexander, all of Nanih Waiya, MS.

The family will have a private family viewing at Jones-Wynn Funeral Home in Villa Rica, GA. Graveside Services will be conducted by McNeece-Morris Funeral Home at Mantachie Cemetery in Mantachie, MS.

To send a flower arrangement to the family of Cliff Chambliss, please click here to visit our Sympathy Store.