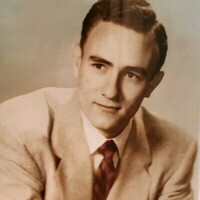 Jonathan Lopez Powell, 84, died Friday, April 10, 2020, at the Baptist Hospital, Oxford. He was born on August 31, 1935, the last of fourteen children born to James Claude and Maude Mae Brazeal Powell. He and his twin sister were born in the Blair Community near Guntown. Jonathan’s father was a sharecropper and life was hard for the family. His father died of sunstroke when he was only eleven years old. When Jonathan was twelve he started his first job as a car hop at the Leigh-Elowan Grill on South Gloster. After he had gained enough experience he was hired by Johnnie Chism at Johnnie’s Drive Inn where he worked until he graduated from high school. Every paycheck was given to his mother to pay their rent. Jonathan was blessed with tips which provided for his school supplies and his clothes. He graduated from Tupelo High school in 1954 as an honor student where he was active in the choir and a percussionist in the high school band. He was named in the Who’s Who in American High School Bands as First Chair Percussionist. After graduation he was cleared to go to Washington, DC where he worked for the FBI and was trained as a Finger Print Technician. While in Washington, he attended George Washington University night school. After fourteen months in Washington he was transferred to Chicago where he was trained as a Communications Specialist. In those fourteen months he was promoted from a GS3 to a GS5. In Chicago, he attended Wright Junior College. He was drafted into the Army and took basic training at Ft. Chafee, Arkansas and AIT training at Ft. Gordon, Georgia. He was then shipped to Camp Darby, a Southeast European Task Forces Post in Livorno, Italy where he served as a Cryptographer in the U.S. Army Signal Corps. While at Camp Darby he served as Vice President of the Protestant Men of the chapel, a charity organization that provided aid to Italian children and needy people. He was also a Chapel Choir member and taught a high school Sunday School class. Upon discharge, he returned to Washing, DC to resume his government career. However, the only opening was in Norfolk, VA. Jonathan didn’t like this city and yearned for the church and friends he left in Chicago. He returned to Chicago and began working in the Comptroller’s Department of The First National Bank of Chicago while attending Northwestern University to complete his BBA Degree on a GI bill. After five years, he then joined Sloan Valve Company as Chief Cost Accountant. With Sloan Valve Company, he served as Customer Services Manager, OEM Sales Manager and finally he moved to Miami, FL as Field Sales Administrator. He retired in December, 1992 and returned to his hometown of Tupelo. He married Phyllis Copley in Chicago on June 13, 1964. Jonathan and Phyllis were blessed with a daughter, Melissa (Lisa) Powell and a son, Michael Powell. This marriage ended after 24 years. After he returned to Tupelo, his sister introduced his to one of her best friends, Carrie Storey Thompson and they were married in August, 2000. Wherever Jonathan has lived he has always been actively involved in church life. He has served as Deacon, Sunday School Director, Choir Member, Soloist and Sunday School Teacher as well as serving on many committees and various leadership roles. He has lived a devoted and productive life serving Christ.

He was preceded in death by his parents, five brothers and seven sisters.