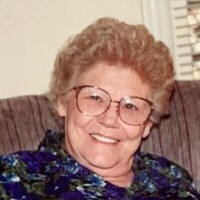 She was preceded in death by her mother, Ressie Jane Monts Johnson, her father, William Marvin Johnson, her brother, Buck Johnson, her twin sister, Janelle Johnson, and her husband, John Hoyle King, Sr.

Janet and her twin sister, Janelle, were born prematurely on July 28, 1921, weighing only three pounds each.  Their mother gave birth to them at home on their property in Royce City, TX where their father was a sharecropper.  Their young parents, both twenty-seven, did their best to keep them alive.  Unfortunately, without access to healthcare, Janelle passed away within a couple of months of her birth.  Janet survived and continued to thrive for the next ninety-eight years and nine months.  Along with her big brother, Buck, the young family left Texas and returned to Northeast Mississippi around 1930.  Her father, “Marvie”, continued to farm during the day and moonlighted as an auctioneer.  Her mother, Ressie, worked as a seamstress at Reed’s Clothing in addition to sewing in her home for ladies in the Tupelo area.

Janet graduated from Saltillo High School in 1941.  She married her childhood sweetheart, John Hoyle King on December 4, 1942.  During the course of twenty years as a ‘career’ military family at army bases in Washington, North Carolina, Alaska, and Ohio, John and Janet had three children and endured two world wars (World War II and the Korean War).  The family returned to Mississippi in 1965.

Janet lived many years in her beloved Saltillo home.  She was a wonderful cook.  She was known for her big Sunday dinners and holiday feasts.  She took note of individual family favorites and would be sure to serve them up whenever they came to visit.  She loved to garden.  Her clematis vines were a staple in the neighborhood and she proudly posed with them for pictures.  She also loved to decorate her house.  You never really knew where the couch or television would be from one visit to the next.  Her favorite hobby in recent years was to play bingo with friends-especially Mildred, Fannie, and the ladies at Town Village in Memphis, TN.

In her later years, Janet was blessed to live with each of her children for a time.  She lived in Florida with her eldest daughter, Judy, and her family for two years.  She moved to Boulder City, Nevada in 2017 and was cared for by her son John, and his wife, Martha.  She also lived in Memphis, TN near her daughter Joy, and her husband Rusty, for several years in between and then again as they cared for her in their home during her final days.  During each of these seasons, Janet enjoyed making memories with her children and their families.  as though she was

Janet faced many challenges over the years, but you would never have heard her complain.  She found delight and appreciation in the simple joys of life.  She always had a smile and a kind word for everyone who was fortunate enough to meet her.  She loved her family fiercely.  If you met Janet King, you witnessed big LOVE.  She loved people and she loved the Lord-and He loved her right back, calling her home to be by His side on a day of glorious celebration among the Heavens.

Brother Tim Green, her pastor from Saltillo United Methodist Church where she was a long time member, will officiate at a graveside service.  The service is to be conducted by Lee Memorial Funeral Home at Saltillo Cemetery, where she will be laid to rest beside her husband, John, on Saturday, April 18, 2020 at 2:00 p.m.  The service will observe current social distancing guidelines for those in attendance.

In lieu of flowers, you may honor Janet by making a donation to Baptist Trinity Hospice, whose caring nurses and staff helped make her final days more comfortable.