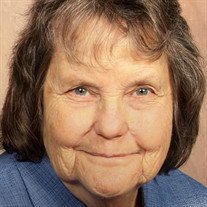 Martha Ann Roberts Prestage, 82, passed away on Thursday, July 9, 2020 at her home in Hatley. She was born on January 18, 1938 in Oceola, AR to James Alford and Lou Ella Dill Roberts. She attended Shannon High School and she was a homemaker. Mrs. Prestage was married L.C. Prestage for 43 years until his passing also working in the area garment factories to help provide for her family. To know her was to love her, and it didn’t take long for a person to realize the heart of Martha Prestage. She was a long-time and faithfully devoted member of First Assembly of God in Amory where her life revolved around the children. She would work with the children in Missionettes, Sunday school, and the nursery. The first church bus was her station wagon, and you could often see it full of children whom she loved and wanted to be taught the word of God. Selfless in every way, she would help anyone in need and would cook up to 50 biscuits of a morning for her children and their friends. Her faith saw her through many hardships in life of which she never complained. In her spare time, if she had any, she would garden, sew, often read her Bible, work word puzzles, and spent time with her family, especially her grandchildren and siblings. She knew the transient nature of this life so she affected peoples’ life for good and her legacy will outlive her and only eternity will tell the good she has done.

Funeral services for Martha Prestage will be at 2 p.m. on Sunday, July 12, 2020 at First Assembly of God in Amory with Bro. Justin Myers, Bro. Bob Wilburn, Bro. Gray, and Bro. James Hall officiating. Burial will follow in the Keyes Cemetery. Cleveland-Moffett Funeral Home of Amory is in charge of the arrangements.

The family would like to thank Legacy Hospice and Katrina Andrews, Temeral Johnson, and Belinda Polk for their care.

Visitation will be on Saturday evening from 5 until 8 p.m. at the funeral home and she will lie in state at the church on Sunday from 1 p.m. until service time.

Memories and condolences may be shared with the family at clevelandmoffettfuneralhome.com