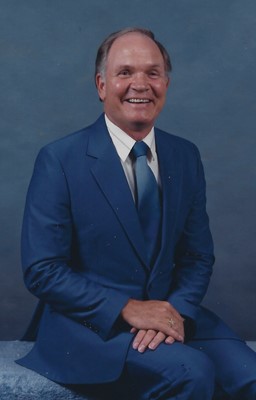 Charles William Roye, born September 11, 1935, went to be with his Lord and Savior, Jesus Christ, on August 4, 2020 after a brief illness. He was a member of Pleasant Grove Baptist Church where he served as a deacon.

Charles was a 1953 graduate of Pontotoc High School. He continued his education at Itawamba Community College and graduated from Mississippi State University in 1957 with a Bachelor of Science in Industrial Arts. He later returned to Mississippi State University and received a Master of Education in 1969. Charles began his educational career, teaching one year in California, 1957-1958. He returned to Mississippi and enlisted in the Army National Guard. He completed the requirements as a cannoneer in Fort Chaffee, Arkansas, in February of 1959. Officer’s Candidate School was in Fort Still, Oklahoma. He graduated as a 2nd Lieutenant in August 1960. After completing his military requirements, he taught one semester at Holmes Junior College to fill an unexpected instructor absence. Afterwards he accepted a position at Greenwood High School (Greenwood, MS) and taught Mechanical Drawing and Industrial Arts for five years. During this time Charles married Eunice Bruce from Belzoni, MS and had two children, Marchelle and Allen. He was a fierce Little League Football Coach while in Greenwood, winning several championships. He briefly returned to Pontotoc to assist his mother in opening Roye’s Fabric and Sewing Corner. Afterwards, the family moved to Jackson, MS where Charles worked as an Equipment Specialist for the Trade and Industrial Division of the Vocational Educational Staff for one year. Once again, the family returned to Greenwood, MS, where he worked for the Leflore County School District as a purchasing agent. Finally in 1971, Charles returned to his hometown of Pontotoc, where he became the first director of the new Pontotoc Ridge Area Vocational and Technical Training Center. During his tenure he served as President of the Mississippi Vocational Association in 1974. His son Chuck, was added to the family in 1975. He remained at the Pontotoc Vo-tech until his retirement in 1988. A few months after retirement he returned to the Center for five years, working part-time on special projects.

Charles loved life and the outdoors. He was a lifelong hunter and fisherman. He enjoyed these sports locally as well as in other states. He was quite attracted to hunting antelope, elk and mule deer in the states of Colorado, Utah and Wyoming. He learned to fly an airplane with his solo flight, occurring on October 1, 1971 in a Cessna 2237J. Charles was civic minded and belonged to the Lions Club where he served one term as its President. He was also involved in cattle farming, working a herd of 75 beef cattle during the 1970’s. He enjoyed working an annual vegetable garden. He was involved in the Pontotoc Beagle Club offering a spot for its Clubhouse on his property. He had great success in showing gaited saddle horses and was a member for several years of the Mississippi Spotted and Bits & Spurs Saddle Horse Associations.

His greatest accomplishments were the impact he left upon the people around him. Charles was an optimist. He encouraged everyone to be the best that they could be. He was perceptive of the needs of others and acted with great kindness in meeting those needs. It is evident in the many competitions and awards his staff and students won while he was Director of the Vo-tech. The clubs he joined thrived under his leadership. He was a true servant leader. Everything he did involved his children and grandchildren. He included them in his hobbies and supported them in their activities. He attended countless Christmas programs, recitals, banquets and sporting events, the latest watching Anna Catherine play basketball her Senior year at South Pontotoc. There were many hunting, fishing and horse related trips. He taught us all how to work, laugh and play. Many a person in Pontotoc County is better for their acquaintance with Charlie Roye. Whether you called him Mr. Roye, Charles, Daddy, PawPaw, Uncle Charlie or friend he is a presence that will be surely missed.

Due to COVID 19, a private family graveside service will be held at 10 AM, Saturday, August 8, 2020 at Pleasant Grove Cemetery with Rev. Paul Sims and Rev. Fred Hartley officiating. Browning Funeral Home is honored to assist the family with the arrangements.

He was preceded in death by his parents, Cecil N. Roye and Ruby Matthews Roye, a brother, Wayne Roye and a sister-in-law, Ann McWhirter Roye.

The family request that in lieu of flowers and gifts, donations be made to the Pleasant Grove Cemetery Fund, C/O Dennis Henderson, 917 Garrett Creek Loop, Pontotoc, MS 38863.