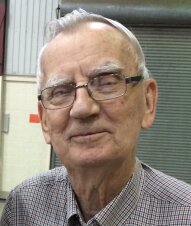 Henry Harold Rone, 89, of Starkville, Mississippi, died peacefully on August 13, 2020 from complications due to a fall. He was known to everyone as Harold or “Uncle Bit.” Born on October 30, 1930 to Effie Pickle Rone and Henry Valentine Rone, he grew up on a farm in Ethel, Mississippi and was a 1950 graduate of Ethel High School where he met his future wife, Fay Walker. He was a Korean War veteran and after serving in Korea, returned to marry Fay to whom he was married 61 years. He attended horology school at Jones Junior College and put those skills to good use in his retirement tending to clocks of all ages at the Cullis Wade Clock Museum of Mississippi State University.

After working in sales for many years in Starkville, Harold seemed to know everyone and never met a stranger even in far away places. He was a teaser and practical jokester. He loved making his mother-in-law’s sweet pickles every year and was known to send gallons through the mail. He was a long-standing member of Aldersgate Methodist Church and he and his wife had a monthly “supper club” with dear friends for approximately 40 years.

Harold is survived by his daughter Lisa Rone (Melba Lara) of Chicago, IL, his son David Rone of Starkville, his sister Ruby Fountain of Forest and many nieces, nephews, and grands. He was preceded in death by his wife, Fay Walker Rone, his sister Ethel Brunt, his brother Joe Rone and his parents, Effie and Henry Rone.

The family wishes to thank the doctors and staff of North Mississippi Medical Center for their kind care over the years and all his Starkville doctors who kept him going.

Due to Covid-19 we will be holding a memorial service at a later date.