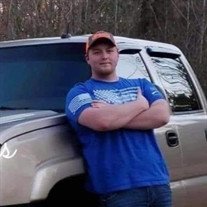 Errik Skyler Oliver, 22, passed away on Sunday, August 16, 2020 in Quincy. He was born on June 8, 1998 in Amory to Charles Eric Oliver and Elisabeth Williams Oliver. A 2016 graduate of Amory High School, he competed in the Skills USA Competition with the Amory Vocational Center, and was currently working as a welder at Bolzoni Auramo in Sulligent where he was a hard worker. Skyler was an avid outdoorsman and enjoyed all things hunting and fishing. He took great pride in his pickup truck and was satisfied wearing blue jeans and boots, and his cap and sunglasses. He enjoyed life to the fullest and displayed true friendship having a listening ear willing to help anyone who called. Anyone who knew him could see he had a heart of gold and had countless friends. He knew the importance of family and loved to spend time with them especially his little brother and attended Hamilton Revival Center with his father and Greenbrier United Methodist Church with his mother.

Funeral services will be at 2 p.m. on Wednesday, August 19, 2020 at Cleveland-Moffett Funeral Home with Bro. Shawn Hile officiating. Burial will follow in Hatley Cemetery.

Visitation will be on Tuesday evening from 5 until 8 p.m. at the funeral home.