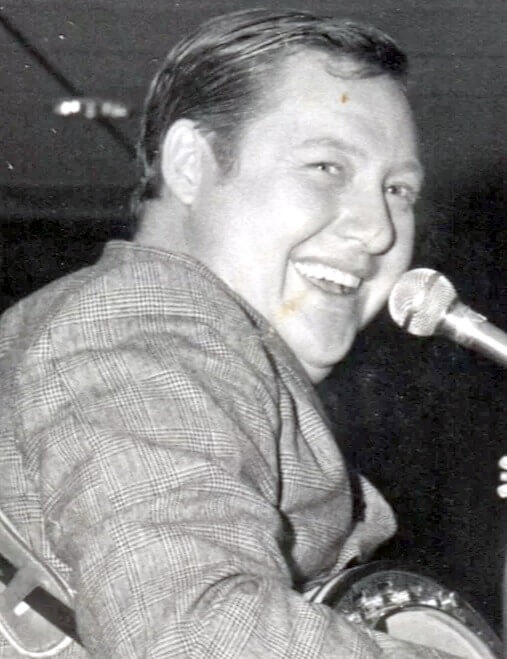 For more information on Billy and his life, please see http://www.billyboren.com

VERONA –   The heavenly hills are alive with the sound of music, laughter, and storytelling like never before when old big hearted beltin' Billy Boren arrived on Tuesday, August 19th, 2020. With banjo in hand strumming and that melodious baritone/tenor voice singing, Billy saw Jesus and was rejoined with his family and friends gone before. Billy Eugene Boren was the 3rd of 4 children born June 26, 1937 – at home in the Centerville Community of Itawamba County. His parents were the late Charlie Clifton Boren, Sr. and Clara Bernice Long Boren, progeny of pioneer Itawamba County citizens. Billy had two older siblings, Charlie and June, and a baby sister, Nancy. Billy grew up in a loving and encouraging family that knew how to celebrate the vim and vigor of life. He graduated from Tupelo High School and won the local talent show at the Miss-Alabama Fair and Dairy Show, earning a place at the Mid-South Fair Talent Show. He won first place and an all expense paid trip to New York City to appear on CBS's Ted Mack Show where he won 1st place for 3 consecutive Saturday nights. This opened the door for a lifetime career as a singer, splendid musician, master of ceremonies, promoter, and entertainer. He partnered early on with his Tupelo friend, Bob Kenney, a magician launching a remarkable career and the two formed a lifelong friendship. Billy sang, joked, and plunked his banjo in clubs and countless venues large and small across North America and worldwide. In addition, Billy was also a popular singing ringmaster for circuses across the US and Canada for over 32 years. As a young man, his work also included being a DJ on WTUP and WELO radio stations as well as an announcer on WTVA television station. While the entertainment world was the perfect fit for Billy, he ultimately realized the need for more permanency. Like his brother before him, Billy opened and operated, with his family in Verona, a highly successful clothing store which he appropriately called "Billy's Britches". Later in life, Billy slowed down and became the Director of the Lee Country Agri-Center and North Mississippi Regional Fair. Billy's parents and he and his family after his marriage to Sue attended the Verona United Methodist Church where he sang in the choir for many years. A naturalist and lover of the outdoors, Billy spent his spare time fishing and hunting with family and friends, especially enjoying Sardis Lake. A remarkable conversationalist, Billy's life brought joy to thousands. He was a rare breed in the historic fashion and league of other Mississippians who made the world a great place with their mastery of music, entertainment, and storytelling. He will be missed.

The family will not be having a public service due to Billy's death being from COVID-19, and the current pandemic situation. We invite you to go to www.billyboren.com and enjoy the collection of photos, singing, articles, play bills, videos and other reminiscences of Billy's life. The web site also contains footage from Billy's time on the Ted Mack Show and from his 75th and 80th birthday celebrations held at the Ice House in Tupelo, which were truly a celebration of Billy's life. Holland Funeral Directors is honored to be serving their friends.
Billy is survived by his 4 children, Suzanne Davis (Chris) of Forrest, VA; Melinda Maddock (Simon) of Colleyville, TX; William "Bill" Boren (Kimberly) of Madison, MS; and Cliff Boren of Oxford, MS. Billy has 5 grandchildren, Ashley, Benjamin, Christopher, Willow Kate, and Sutton. His sister, Nancy Boren Williams (Leon) of Saltillo, several nieces and nephews who dearly loved Uncle Billy and a host of friends nationwide. Billy was preceded in death by his parents, Charles and Bernice, two siblings, Charlie Boren (Jean) of Amory and June Boren Wildman (Johnny) of Tupelo and his children's mother, Sue Boren on May 15, 2014.
In lieu of flowers, the family asks that you make a donation to a charity of your choice. Please leave your condolences on Billy's website at www.billyboren.com.