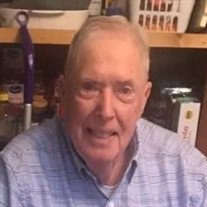 He was preceded in death by his brothers, Artis and Calvin; sisters, Velcie Sullivan and Edna Estes; and his parents.

He was born on February 18, 1933 to George Carlos and Estelle Rhudy who preceded him in death. He was a member of the Nettleton Pentecostal Church. He retired from the Mississippi Department of Transportation in 1995 after 37 years of service as a bridge inspector. After he retired, he began his second career as a registered land surveyor. He was still licensed until the day of his passing. He proudly served in the United States Army at Ft. Hood, Texas and was honorably discharged on 30 April, 1961 as a corporal.

For all who know him, he loved to talk about the bridges he had inspected and the surveys he had done. He will be greatly missed especially when we travel over the roads and bridges of North Mississippi. He especially enjoyed traveling whether it was annual trips to the Smoky Mountains or across the country from New York to California.

Funeral services will be at 3 p.m. on Saturday, August 22, 2020 at Cleveland-Moffett Funeral Home with Rev. Sammy Raper and Rev. Daniel Herndon officiating. Burial will follow in the Union Cemetery.

Visitation will be on Saturday from 1 until 2:50 p.m. at the funeral home.

Memorials may be made to St. Jude Children’s Research Hospital, the American Cancer Society, or to a charity of choice.

Due to COVID and an abundance of concern for the family, it is requested masks be worn and social distancing guidelines be observed.