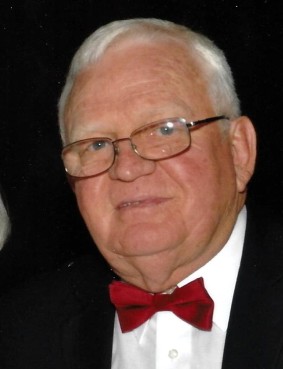 NETTLETON – James Bruce “Jimmy” Cayson, at age 74, realized the promises of his strong faith in God and his word and met his Creator on Wednesday, August 26, 2020 at NMMC in Tupelo.  Jimmy was born in New Albany on April 30, 1946 to the late James Winford Cayson and Imogene Bruce Cayson.  He lived in Sherman until 3rd grade when the family moved to Tupelo.  Jimmy graduated from Tupelo High School in 1964 and attended IJC.  He joined the U. S. Army and served in Germany and stateside during the Vietnam Conflict.  His role included being the attaché for an Army General as well as serving in the Reserve after active service. Jimmy married the most beautiful girl in the world, Linda Kaye Riley of Nettleton, on Oct. 25, 1968, a marriage of almost 52 years at his death.  He and Kaye made Nettleton their home and their heart until this day.  Jimmy spent much of his life in the business world.  He and Kaye owned Cayson’s, Inc., a clothing store in downtown for 25 years.  He was an Agent and Financial Advisor for Farm Bureau for 15 years.  A patriotic American and a greatly involved man in civic responsibility,  Jimmy was former President of the Nettleton Lion’s Club, a leader in the Nettleton Horse Show, President of the Nettleton Schools Booster Club, former School Board member, and the sports announcer for the Nettleton Tigers football team for over 30 years.  He and his wife Kaye were co-founders of God’s House of Hope, a stellar drug rehabilitation program headquartered in Nettleton. He was the financial advisor and teacher at God’s House of Hope.  God was central in his life.  He was a co-founder of Crosspointe Fellowship Church and was chairman of the board at his death. He taught Sunday school there and was formerly a longtime active member of the Nettleton United Methodist Church. Jimmy’s life was always purpose-filled, with encouraging words for young people, a devoted love for family-his wife, daughters and their families. “Poppy” dearly loved, followed and mentored his grandchildren.  A man of enormous wisdom, Jimmy cut a wide path for God, country, community and family.  He will be sorely missed.

A service of celebration in Word and Song will be at 2 PM Saturday, August 29, 2020 at Crosspointe Fellowship Church on Metts Road in Nettleton with Bro. Tommy Ray Dabbs and Bro. Scott Carter officiating.  Private burial will be in the New Chapel Cemetery. Visitation will be from Noon-service time on Saturday at Crosspointe Fellowship. The family sincerely requests that you wear your mask at the celebration.  Holland Funeral Directors is honored to be serving their longtime friends.

Memorials may be made to God’s House of Hope, P. O. Box 393, Nettleton, MS 38858.  Condolences may be emailed to hollandfuneraldirectors@comcast.net.