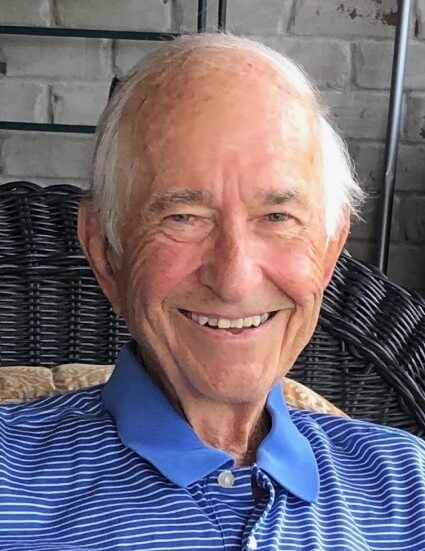 Saltillo, MS – Charles Slade “Pap” McElroy died peacefully at his home after bravely fighting a brief illness with Leukemia.  Known for his infectious smile and love of deep laughter, Pap lived a life dedicated to service to others.  First in his heart and life was his love for the Lord.  He was known as a true southern gentleman.  He leaves behind a family he loved passionately and many cherished friendships.

He was predeceased by his parents, Herman Elliott McElroy and Irene Quinn McElroy; his first wife and the mother of his children, Edith Ann Gordon McElroy; his sister, Elizabeth Ann McElroy Wachter; and his brother, Elliott “Buddy” McElroy.

Pap was born in Starkville on November 18, 1933 and was raised on the Mississippi State University campus.  He graduated from Starkville High School in 1952 and Mississippi State University in 1956, where he was an active member of the Kappa Sigma Fraternity.   After graduation Pap entered the United States Air Force as a commissioned officer flying the F101B and F86L.  After receiving an honorable discharge, he began his civilian career with the Northeast Mississippi Industrial Development Association, which was followed by a marketing career in the banking industry, and ended as a principal at the Reynolds Insurance Agency in Starkville.

Pap was a dedicated member of the St. Luke United Methodist Church in Tupelo.  He served as the 1983 Mississippi State University National Alumni President, and was a founding officer of the MSU Bulldog Club and the Starkville Country Club.  Pap was a former Chairman of the Board of Palmer Home for Children and the Starkville Housing Authority.

Family services were held Friday at St. Luke United Methodist Church in Tupelo and Saturday at Oddfellows Cemetery in Starkville.  Friday’s St. Luke service may be viewed at https://youtu.be/dNETh7ag324