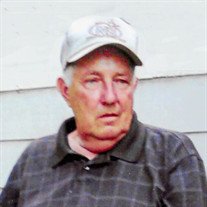 Samuel Dwight Carter
Amory – Samuel Dwight Carter, 74, started his new life in Heaven on Friday, September 11, 2020. Born on November 21, 1945, in Quincy, MS, he was a son of the late Samuel August and Beatrice Mae Thatcher Carter.

Dwight grew up in Monroe county and attended Quincy and Becker Grammar Schools. He graduated from Amory High School and went on to further his education by attending classes at Itawamba Community College. He proudly signed up to serve his country in the Army National Guard. Later, he joined the US Navy in 1968 and served during the Vietnam War and he was a Gunners Mate on the USS Stribling. Dwight was most proud of serving in the US Navy and he had some very interesting stories to tell about his time at sea.

Dwight loved the Lord and he was Baptist. He married the love of his life, Rebecca Sprinkle Carter, on December 31, 1976 and they had many wonderful years together. Dwight was a great provider and worked at Star Printing in Amory for over forty years. He was a great dedicated employee and a skilled printer. Some of his close friends were Tommy Cole, Carol Stone and Mel Kinsey. An outgoing man, he was a friend to many. Dwight was a true servant, he cared about and was proud of his community. To show his pride, often times he would travel the side of the roads to clean the unsightly litter people left behind.

In his free time, he liked to enjoy the quiet while fishing. In contrast, the craziness of spending time with his grandchildren was something he also cherished. He was a jokester and prankster. He liked making people laugh and he always brought a smile to those who knew him. He liked soft rock and some country music. In addition to fishing, he liked to be outdoors working in his garden growing his prize vegetables. He had a special place in his heart for St. Jude and always gave to that charity.

In addition to his parents, he was preceded in death by his daughter, Kasey R. Carter; sister, Deborah Kay Carter; son in law, G.T. Cantrell.

Please observe social distancing guidelines and wear a mask when attending the visitation or service.