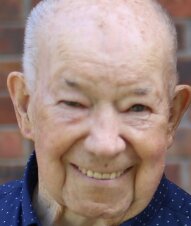 John Otis Kennedy, 91, passed away on September 15, 2020 at Montgomery Gardens in Starkville, MS. Mr. Kennedy was a retired machine operator with Weavexx Manufacturing and a member of Starkville Church of God, where he was an elder and usher, for many years and also was on the finance committee. He loved Mississippi State University sports and fishing. He was a mentor to many people, and especially with his family who thought of him as the ULTIMATE. He was known by the “twinkle in his eye”and “smile on his face”

He was preceded in death by his parents, L. H. Kennedy and Violar Fox Kennedy; 3 sisters, and 4 brothers.

Visitation is scheduled for Saturday, September 19, 2020 from 11:00-12:00 at Starkville Church of God, with the funeral service immediately following. Rev. Glenn Kennedy and Rev. Jesse Duncan will conduct the service. Burial will be in Memorial Garden Park Cemetery in Starkville.