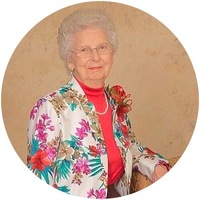 Ethel Holland Morrison, 94, died Tuesday, September 22, 2020. She was born on Sep 1, 1926 to Carrie and Vernie Holland of Lilbourn, MO, and lived in Pontotoc, MS all her adult life until she became ill recently.
Visitation will be Friday, September 25, 10:00AM – 11:00AM with services at 11:00AM at West Heights Baptist Church, Pontotoc, with Reverend David Hamilton officiating. Burial will follow in the West Heights Baptist Church cemetery. Baldwin Memorial Funeral Home of Pontotoc is in charge of arrangements.
She was preceded in death by her husband Gernie Morrison (2004), her parents, her brothers Albert Holland, Alfred Holland, Jerry Holland, Vernie Holland Jr, Walter Holland, and Jewel Holland, her sister Mary Holland Moss, and a great grandson Ethan Herrington.
She is survived by her sons Steve Morrison (Jeannie) of Conway, AR, Wendell Morrison (Patti) of Nettleton, her daughter Suzanne Morrison Hubbard (Jim) of New Albany, and her brother Richard Holland (Margarette) of Dexter, MO. She is also survived by 5 grandchildren, Chad Hubbard (Casey) of Southaven, MS, Thad Morrison (Veena) of Conway, AR, Britt Hubbard (Joanna) of Hernando, Tori Roebuck (Corey) of Ocean Springs, and Carrie Herrington (Ron) of Nettleton, and 11 great grandchildren, Peyton Free, Austin Morrison, Taylor Morrison, Madeline Morrison, Will Roebuck, Riley Roebuck, Alleigh Herrington, Trey Herrington, Wade Hubbard, Kaitlyn Hubbard and Piper Hubbard.
She was a graduate of Lilbourn High School in Lilbourn, MO and Draughon's Business College in Memphis. February 28 of 1946 she and Gernie Morrison were married and lived a happy family life in Pontotoc for fifty-eight years until his death in 2004. A dedicated Christian and one of the first members of West Heights Baptist Church, she volunteered her time to help others and was well known throughout the community. She was an active member of her Sunday School class, the Young at Heart group, worked many years as an Activities Volunteer for the Pontotoc Nursing Home, and did other volunteer work in her neighborhood and community until health issues no longer permitted.
She was a loving wife, mother, grandmother and great-grandmother who loved spending time with her family and many friends. She will be greatly missed by her family and all those who knew her.

In lieu of flowers donations may be made to West Heights Baptist Church.

To send a flower arrangement to the family of Ethel Holland Morrison, please click here to visit our Sympathy Store.