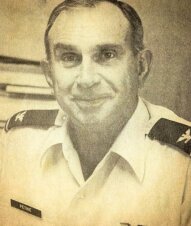 Pete was preceded in death by his mother, Cora Katherine Hayes Talboon, his father, Walter Herman Petrie and his step-father Clem Talboon.

Pete was born on 19 August 1931 in South Bend, Indiana. Pete’s father died when he was very young. At the age of eight, Pete was responsible for harnessing and driving a team of Clydsdale horses to work the farm. Pete often relayed stories to his children of going to church as a young boy with his mother, which left him with a deep love of Gospel and Blue Grass music. (In particular, Pete loved “When the Roll is called up Yonder” and “In the Garden”.)
Pete first met Martha Jean Rosbrugh when he was thirteen. They dated on and off through high school. They were voted homecoming Prince and Princess for the Senior Prom. Pete graduated from Riley High School in 1949.
Pete enlisted in the Army Air Corps in November 1950. After basic training at Sheppard AFB, he was sent to Keesler AFB to attend Electronic Fundamentals training. He went on to complete Radar Fundamentals and Airborne Radar Systems training. Pete excelled in electronics and after being promoted to “Buck Sergeant” he became an Instructor. Just about this time, the Air Force needed more pilots and dropped the requirements to apply to Aviation Cadets training from a four-year college degree to either two years of college or a GED. Pete took the GED without studying and passed, then applied to be an Aviation Cadet. In a very short time he was accepted into the program and was assigned to Marana Air Force Base, AZ, where he trained in T-6G aircraft. Pete was the first to solo in his class. (Meanwhile, Martha Jean Rosbrugh had graduated from Indiana University and moved to Tuscon, AZ where she was a teacher. They were dating and Pete often got in trouble for “buzzing” Fort Lowell School in Tucson, AZ!! Even though it was not permitted, very much in love, Pete and Martha were married “secretly” in 1952 while Pete was still an Aviation Cadet.)
Upon graduation from Aviation Cadets on June 16th, 1953, Pete was discharged from his Enlisted service in the Air Force and was Commissioned as a 2nD Lt. Then it was on to Nellis AFB for to “Jet Fighter Training” in the F-86 Sabre aircraft. Pete loved to fly!!
Pete’s active duty assignments after completing pilot training were: Buckner Bay and Naha Air Base in Okinawa; Clark Air Force Base, Philippines; Lockbourne AFB, OH and Peterson AFB, CO. At this point in their married life, Pete and Martha had five daughters. Pete and his family moved from Colorado to Laramie, WY so that Pete could attend University of Wyoming, where he completed both a Bachelors and Masters Degree in Electronic Engineering. Pete changed from flying status to become a Communications Officer in 1963. He was assigned to Cam Rahn Bay, Vietnam during the Vietnam War as a Maintenance Supervisor, an assignment for which he was awarded a Bronze Star. After Vietnam Pete was assigned to the Pentagon as a Special Projects Officer, Deputy Chief of Staff for Systems and Logistics, where he was awarded his first Legion of Merit for his instrumental role in the USAF Rivet Joint Reconnaissance Program. He went on to serve as the 1961st Communications Group Commander at Clark AFB, PI, for which he was awarded his second Legion of Merit. Pete’s final assignment was at Langley AFB, VA as the Deputy Director for Communications Support for the Tactical Air Force Interoperability Group (TAFIG), for which he was awarded his third Legion of Merit. Pete retired from Active Duty Air Force 31 Aug 1978.
Pete and Martha moved to Foley, AL in 1978 where he started a second career as an Air Force Junior Reserve Officer Training Corps (JR ROTC) instructor. While at Foley High School, Pete was instrumental in helping students to earn over $2,000,000 in scholarships. He was recognized as the Foley High School Outstanding Instructor multiple times, the Baldwin County Outstanding Instructor, and Alabama Outstanding JR ROTC Instructor multiple times. He was also a Rotarian and served as the Grand Master of Foley Masonic Lodge 766 from 1998-2000.
Pete and Martha moved to Starkville, MS in 2000 and lived a quiet life enjoying their grandchildren. Pete and Martha were members of the First United Methodist Church. Pete maintained his private pilot license and flew often with his family. Throughout his life Pete retained a love of farming from his early life and taught his children and grandchildren to love, respect and care for the Earth.
His daughters remember two of his favorite sayings were “Onward and Upward!” and “We don’t get a lot done but we sure have a lot of fun!”. Pete loved to laugh!!

When you read this obituary, please take a moment to commend Pete for a remarkably exciting and well-lived life: a man of very humble beginnings who went on to have a tremendously positive impact on the lives of many in service to our great Nation’s defense and as a teacher, mentor and friend.
Please feel free to leave on-line comments and add photo memories of your relationship with Pete. There will not be a funeral service at this time.

The family asks that in lieu of flowers, please make a donation in memory of Walter Petrie to the American Parkinson’s Disease Association (APDA).

The Air Force Anthem
(Verse I)
Off we go into the wild blue yonder,
Climbing high into the sun;
Here they come, zooming to meet our thunder,
At ’em boys, Give ‘er the gun! (Give ‘er the gun!)
Down we dive, spouting our flame from under
Off with one helluva roar!
We live in fame or go down in flame. Hey!
Nothing’ll stop the Army Air Corps!
(Verse II)
Minds of men fashioned a crate of thunder,
Sent it high into the blue;
Hands of men blasted the world asunder;
How they lived God only knew! (God only knew, then!)
Souls of men dreaming of skies to conquer
Gave us wings, ever to soar!
With scouts before and bombers galore. Hey!
Nothing’ll stop the Army Air Corps!
(Verse III)
Here’s a toast to the host
Of those who love the vastness of the sky,
To a friend we send a message of his brother men who fly.
We drink to those who gave their all of old
Then down we roar to score the rainbow’s pot of gold.
A toast to the host of men we boast, the Army Air Corps!
(Verse IV)
Off we go into the wild sky yonder,
Keep the wings level and true.
If you’d live to be a grey-haired wonder
Keep the nose out of the blue. (Out of the blue, boy!)
Flying men, guarding the nation’s border,
We’ll be there, followed by more!
In echelon we carry on. Hey!
Nothing’ll stop the Army Air Corps!