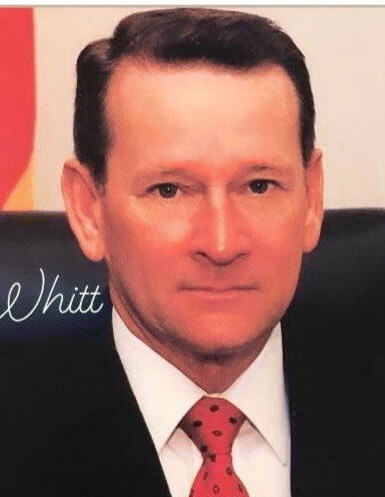 OLD UNION – Charles Murray (Bill) Whitt passed away November 6, 2020 at the Sanctuary Hospice House surrounded by Diane and his girls. Bill was 81 years old. He was born September 25, 1939 to the late Murray (Dink) and Doris Whitt in Houston, MS. At a young age, his family moved to Okolona. He attended Okolona City Schools, Itawamba Junior College, and Mississippi State University. He was a 5-year veteran of the MS National Guard. He was a member of the Tupelo Elvis Presley Fan Club and a member of First Baptist Church Okolona.

During the 1970s, Bill was a self-employed plumber and the owner of Whitt's Lumber Company. He was elected Mayor of Okolona in 1977 and served as mayor for 16 years. He was also a contractor of commercial buildings and houses. Bill was Okolona's Citizen of the Year in 1994. He served on ICC's Board of Trustees and was a member of the Board of Directors of the Rockwell Foundation. He served as president for the MS Municipal Association, MS Insurance Board, North MS Builders Association, Okolona Lions Club, Okolona Horse Show Association, and his beloved Okolona Wilson Park. He spent his whole life enjoying this special place and delighted in the fact his family did as well.

Bill loved his family. He had a great passion for family, friends, traveling, storytelling, and anything Okolona or Mississippi State Bulldogs. He was very patriotic and loved serving the citizens of Okolona and Mississippi. If it was broken, he could fix it. He could build anything. He always had bubble gum as well as tools to spare. He loved dancing, singing, western TV shows, scratch-off tickets, and playing dominoes with friends. Some of his favorite musicians included Mickey Gilley, Jerry Lee, The Platters, Fats Domino, Freddie Fender, Harvey Lester, The Florida Boys Quartet, The Blackwood Brothers, and of course, Elvis.
Left to cherish his memories are wife Diane Wilson Whitt of the Old Union Community; children, Marcy Rock of Mooreville, Pam Moran (Andy) of Saltillo, and Charlie Beth Jaggers (Scott) of Pontotoc; grandchildren, Laura Beth Lambert (TJ), Katie Rock, Mandy Rose Blissard, Gracie Rock, and Whitt Jaggers; great-grandchildren, Mollie Beth Robbins, Thomas Lambert, and Griff Sanford; a chosen daughter, Donna Thompson Cook (Paul and family); a host of other family and friends; and the young men who worked at Whitt's Lumber Company during their teenage years. Long will he be remembered by the kids of Okolona that grew up hanging out at 501 Lee Circle.
He was preceded in death by his parents; his brother Jack Whitt; and in-laws, Roy and Rebecca Wilson.

Services will be held Monday, November 9, 2020 at First Baptist Church Okolona with Bro. Randy Lewman officiating. Funeral services will be at 3:00 pm with visitation starting at 12:00. Burial will be in the Lee Memorial Park in Verona, Mississippi. Holland Funeral Directors will be overseeing the arrangements.

In lieu of flowers, contributions may be made to Sanctuary Hospice House, PO Box 2177, Tupelo, MS.