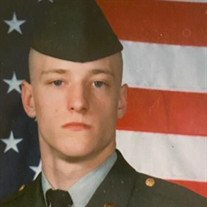 Lakewood, CO – Wesley Ethan Criddle, 36, passed away on November 5, 2020 in Pensacola, FL. He was born January 28, 1984 in West Point, MS to Karen Hankins Butler and Tommie Lee Criddle. Wesley was a loving son, brother and friend to all that knew him or came in contact with him. He was a hard worker who took pride in keeping up the family property, as well as everyone else’s. He loved children and had a special bond with his nephew Ethan Ryder Criddle. Wesley was an outdoorsman who loved going to the beach, kayaking and hunting with his mom. Wesley enjoyed writing poetry and playing keyboards in his spare time. He enlisted in the army under the “buddy plan” with his brother Troy. They went through basic, medical and airborne training together. Wesley went on to Ranger School where he received his Ranger Tab and Tan Beret. He served 3 years in the United States Army. Graveside services and burial will be Wednesday, November 11, 2020, at Sunset of Angels Cemetery in western Clay County with Military Honors. Calvert Funeral Home of West Point is honored to be entrusted with the arrangements. Survivors include his partner Alexandra Ford of Lakewood, CO; his father Tommie Lee Criddle (Kim) of Conroe, TX, mother Karen Butler (Brian) of Rogers, AR, grandmother Joyce Hays of Maben, MS; brothers Troy Criddle III (Jeri) of Indialantic, FL, Danny Butler Deerfield, FL and one nephew Ethan Ryder Criddle. Preceding him in death were his grandparents, Troy D. Sr. and Dola Thompson Criddle, an aunt; Katherine Criddle Morton Calvert, and an uncle; Troy D. Criddle Jr. Pallbearers will be Paul Pine, Chad Wilder, Gregory Bennett, Josh Morton, Michael Kennedy, Josh Towe and Jordon Lockwood.

Honorary Pallbearer will be Harley Diamond.