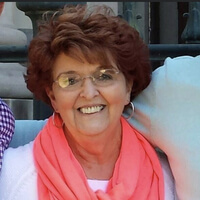 PONTOTOC –   Carol Kay Moorman Aston, 73, passed away Friday, November 6, 2020 at the NMMC in Tupelo. She was born at home in Pontotoc. She married James H. Aston on March 28, 1968, who was by her side when she took her last breath. When she graduated from Pontotoc City, she went to work at the Shirt Factory. When she married James, she quit there and attended Cosmetology School. She has been an active hairdresser for 52 years.
A graveside service will be at 11:00am Monday, November 9, 2020, at the Pontotoc City Cemetery. Bro. Wayne Cobb and Bro. Ken Hester will officiate. Tutor Memorial Funeral Home was in charge of the arrangements.
Survivors, Husband; daughter-Cynthia Aston Chambers; grandsons-Jacob Aston Chambers and Jamichael Latez Gates; two brothers-Joel Moorman (Jackie) and Jerry Moorman (Brenda); four sisters-Anita Carnes Waldrop, Bettie Owen, Kathie Mason (George) and Debbie McKnight (Kenneth); a host of nieces, nephews, great-nieces, great-nephews and many others that she claimed.
Preceded in death by, her parents-George and Frances Moorman and two siblings who died at birth.
Pallbearers, Barry Carnes, Jonathan Carnes, Shane Moorman, Chris Moorman, Terry Owen, Jared McKnight, Bartley Mason and James Earl Aston.