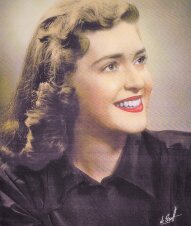 She was preceded in death by her husband of 68 years, Walter “Pete” Petrie, her mother and father, Paul Coppes Rosbrugh and Martha (Himes) Rosbrugh, her brothers, William and Richard Rosbrugh and sister-in-law Shirley Rosbrugh.

She was born on January 14, 1931, in Nappanee, Indiana, and many of her happiest memories were of growing up there. Like many other members of “The Greatest Generation”, she lived through the trials of the depression with courage and devotion to family. She graduated from Riley High School in South Bend, Indiana and was the first woman in her family to graduate from college, enrolling in two colleges at once so that she could take twice the maximum allowed credits at each and graduate in three years instead of four.
She took a job as a teacher in Tucson, Arizona, where she reconnected with her high school sweetheart, “Pete” Petrie. They were married in November 1952 and she began a life of devotion to her family and her husband’s military career. She helped put all five daughters through college by teaching piano lessons, passing on the gift of music to many people. Even with the limited money available on a military paycheck, she made certain all five girls played an instrument, took foreign languages, danced, participated in sports and learned to swim. Later in life she was instrumental in forming the Baldwin County (Alabama) Meals On Wheels Program, working with Literacy Volunteers and Animal rescue, as well as participating in many other community events. She was awarded “Most Valuable Cast Member” for her musical accompaniment to “L’il Abner” with the Baldwin County theater group.
In 2000, she and Pete retired to Starkville, Mississippi, where they enjoyed a quiet country life with grandchildren and family.

She was a woman of iron will, grace, and kindness, with an infectious smile. She left her daughters and grandchildren with an enduring love of music, history, art, flowers, and animals, as well as the importance of service to others. At the time of her death she was listening to “Let There Be Peace On Earth”. That song, one of her favorites, reflects her greatest wish for us all.

In Lieu of flowers the family requests that donations be made in Martha Jean’s memory to The National Coalition for Literacy.