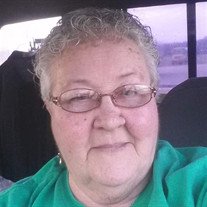 Patricia Ann Hill West, 75, passed away on Wednesday, November 18, 2020 at North Mississippi Medical Center—Gilmore in Amory. She was born on August 14, 1945 in Houston, MS to Robert and Bertha Mae Hill. She later moved to Midland, TX. She was married to William West and later to Joe White. Pat comes from a long line of brick masons, and she helped brick many homes in Northeast Mississippi while working with her brother, Eugene Hill and her sons, Johnny and Wayne West. She enjoyed spending time with her family especially her grandchildren. While her health allowed, she liked bowling and fishing. She was a member of the Bigbee Baptist Church but attended Smithville Baptist Church.

Funeral services will be at 1 p.m. on Saturday, November 21, 2020 at Cleveland-Moffett Funeral Home in Amory with Bro. Scott Carter and Bro. Kevin Crook officiating.

She was preceded in death by her parents; her husbands, one son, John Edward West; a granddaughter, April West; one brother, Eugene Hill; and grandson, Curt James.

Visitation will be on Saturday from noon until service time.