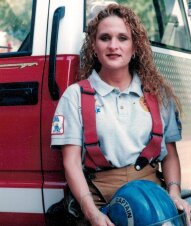 Katharyn Claire Rosenhan passed away on November 22, 2020, in Starkville, Mississippi after a brave and lengthy battle with cancer. She was born in Racine, Wisconsin on October 24, 1972, and had also lived in Jackson, Mississippi, Hammond, Louisiana and, for the last 21 years, in Oktibbeha County, Mississippi. She is survived by her father, Kirk Rosenhan, her mother, Linda Jackson, and her canine son, Shadow, as well as a host of friends and colleagues.
She graduated from Chamberlin-Hunt Military Academy in Port Gibson, Mississippi in May 1990 as Regimental Executive Commander, the highest-ranking female. She earned a National Registration for Emergency Medical Technicians at age 19, training at University Medical Center in Jackson. She was a certified Medical Services Driver and certified Fire Apparatus Driver/Operator.
She spent several weeks on the Mississippi Gulf Coast working Search and Rescue after Hurricane Katrina.
Katharyn had served as Assistant Fire Chief in Maben, Mississippi, and was Firefighter/Safety officer with the Adaton/Self Creek Fire/Rescue in Oktibbeha County, and was also a member of the Webster County Search and Rescue team. She earned the COBRA designation from a FEMA sponsored course at the Center for Domestic Preparedness at the Anniston Army Depot, Alabama.
She earned a WMD certificate for weapons of mass destruction in October 2006 at Elko, Nevada. In fact, Katharyn served in a variety of activities for over 28 years in the Fire Service. One of several courses she attended at the Mississippi Fire Academy certified her a Rural Fire Officer.
Until her illness, Katharyn was additionally employed in the catering business with the Little Dooey Restaurant in Starkville.
She loved being outside, doing yard work, planting flowers and playing with her dog-son, Shadow. She had been actively training Shadow, a German Shepherd, for police ride-alongs. She never passed a yard, garage, or estate sale she didn’t like. Katharyn enjoyed the solitude of exploring the natural wonders of state parks on her own, cherished road trips where she and her mother camped along the way, and treasured a lifetime of chasing fire trucks with her daddy.
Always a leader, and never a follower, you always knew Katharyn’s opinion on things.
There will be no funeral services, as per her wishes that there would be no gathering as she was very concerned with the COVID situation. Perhaps those who knew Katharyn could simply remember our beloved daughter with a moment of prayer or silence.
The family appreciates the wonderful care given her by the Kindred Hospice staff.
Expression of sympathy may be sent to Welch Funeral Home in Starkville, Mississippi (welchfuneralhome.com).
Memorials may be sent to the Adaton/Self Creek Fire/Rescue, c/o Chief Lynn Crowe, 1360 Self Creek Road, Maben, Mississippi 39750.