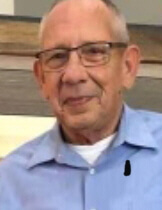 Jericho- Lowell Patrick Hadaway 78 was called to his Heavenly Home on Thursday, December 10, 2020 at North MS Medical Center in Tupelo. His daughter, Vaniece and son-in-law, Scott were at his beside when God called his name. Pat always had a big smile and was very friendly. Pat was born on January 26, 1942 to Newson Patrick and Cassie Lee Dye Hadaway in Pontotoc County. He was a 1959 graduate of Pontotoc High School . Pat started a lifetime career as a butcher or meat cutter. His first job was at Pages Supermarket in Pontotoc, his work career led him to Palmers’ Big Star in Tupelo,Yorks in Verona, Harpers in Okolona, Fred Montesi in Memphis, he worked on a tugboat on the MS river, worked for Mr. Bobby Boatright of Pontotoc, Pontotoc Meat Processing, Stokes Grocery in New Albany for 25 years, and Walmart on hwy 45 in Tupelo, Todd’s Grocery in Saltillo for 5 years and Reed’s market in New Albany. He retired in July 2020 because of health reasons. Besides working Pat loved being outdoors, feeding humming birds, sitting on his porch drinking coffee and he enjoyed traveling. He was a member of Jericho Baptist Church.

Funeral services will be at Waters Funeral Home on Saturday, December 12, 2020 at 2:00 p.m. with Bro. Chris McClusky and Bro. Marvin Robbins officiating. He will be laid to rest in Jericho Baptist Church Cemetery.

Visitation will be at Waters Funeral Home on Saturday from noon until service time.