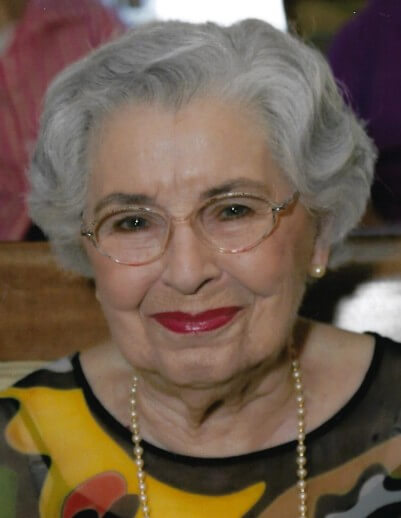 TUPELO – Betty Jean Enlow Cayson, 89, met her Creator from Sanctuary Hospice House on Christmas Day, 2020 after an extended illness.  A native of Tupelo, Betty was born October 4, 1931 to Carl and Besie Whitaker Enlow. She graduated from Tupelo High School in l949 and on June 18, 1949, married John Edwyn Cayson. He died on May 23, 2008.  Betty worked as a deputy clerk for legendary Lee County Chancery Clerk, John A. “Red” Rasberry for 10 years.  At the age of 38, Betty went back to school at Ole Miss to study her passion of Interior Design.  She later studied drafting at ICC.  Betty worked as an Interior Designer for Sears and created the Interior Design Department for Weatherall’s Office Supply. She was sought after by many families privately to design their homes.  Betty was a member of the First Christian Church of Tupelo for 78 years having served as Youth Director, Deaconess, President of CWF and Financial Secretary. A matriarchal figure who always dressed to the 9’s, Betty was a quiet, gentle soul who presence lit up every room. She was a member of both Spring Lake Garden Club and later the Traceway Garden Club.  She was preceded in death by her husband of 58 years, John E. “Eddie” Cayson; one son, John E. Cayson in 2013, her parents, her brother, Carl Whitaker Enlow and one nephew, Carl Enlow, Jr.

A service celebrating her life will be held at 1 PM Tuesday, December 29, 2020 from the Chapel of Holland Funeral Directors with Rev. Ray Morton officiating. Steve Holland will deliver the eulogy. Private burial will follow in Lee Memorial Park.  Visitation will be from 11 AM-service time Tuesday only.  All guests are asked to wear a mask and practice full Covid guidelines.  Holland Funeral Directors is honored to be serving the family.

For those unable to attend, the service may be viewed at 1 PM Tuesday at www.hollandfuneraldirectors.com/Live-streaming.  Memorials may be made to Sanctuary Hospice House, P. O. Box 2177, Tupelo, MS. 38802 or Traceway Manor, 2800 West Main St., Tupelo, MS. 38801.