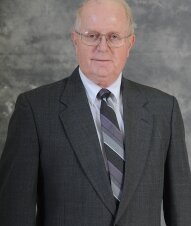 Frank Duane Whisler, 86, peacefully entered his Lord’s presence on December 22, 2020
Frank was as a loving and devoted husband and father. He is survived by his beloved wife of 64 years, Ethel A. Fairchild Whisler, Starkville, MS and five children: Eldon N. Whisler, Starkville, MS; Robyn Beal (Ken) Vancleave, MS; Eric W. Whisler (Julie) Nashville, TN; Kirk B. Whisler, Macon, GA and Helena Goodyear (Norman) San Antonio, TX. He leaves 13 grandchildren and 19 great-grandchildren who were his pride and joy. He fostered four foster children, one of whom became part of his forever family. He leaves his younger brother, Robert (Janet), several nieces, nephews and cousins; and special friends from AZ, Kay and Glenn Long, an ASU student and soldier, who met while Kay was living with the Whisler family.
Frank was born Nov. 20, 1934 in Burton, WV to Robert and Mildred Liming Whisler. His family moved to Morgantown where he graduated from Morgantown High School (1953). He graduated from WVU (BS,1956), (MS,1957), earning his PhD in Soil Physics from the Univ. of Ill. in 1964. While at WVU, he played in the marching band five years including the year they went to the Sugar Bowl. He directed the AFROTC Band and continued to play the French Horn one year at Univ. of Illinois.
His career spanned work with USDA-ARS both in Illinois and Arizona. He worked at the U. S Water Laboratory, Phoenix, AZ for 15 years, where a portion of his research included consulting on water reclamation with the Salt River Project. He concluded his 30 year career as a research scientist/professor in 2002 in the field of Soil Physics in the Plant and Soils Science Dept. of MSU in Starkville, MS. Frank focused on team research in crop modeling on cotton and soybeans, winning with two colleagues, the prestigious Mobay Cotton Research Award in 1988. His research led to over 130 publications, including 72 journal articles. He was known internationally as a lecturer, teacher, consultant and researcher; and was a Fellow in both AASA and the SSSA.
Frank loved his family, his work and his Lord, being baptized into Christ at an early age. Throughout his life, he was an active member and leader in churches of Christ in WV, IL, AZ, MS and the Philippines. He served the Lord faithfully in roles as deacon, Bible teacher, speaker, administrator; and served on the Board of Obong University, Nigeria. He served as a dynamic worship and song director for many years bringing joy to congregations wherever he went through his exuberant singing and speaking. He, also, leaves a legacy of 100’s, if not 1000’s, of international Christians through World Bible School.
Frank will be remembered for his love of family, his benevolent heart, his kindness, his sense of humor, his work and his love of the Lord.
A celebration of Frank’s life will be held at the Starkville church of Christ, 613 East Lee Blvd., Starkville, MS at a time yet to be determined. Interment is planned next summer in the Wadestown, WV Cemetery where three generations of family are buried.
Memorial gifts may be made to Starkville church of Christ or World Bible School both at the Starkville church address, American Stroke Association, or Oktibbeha County Regional Medical Center,
400 Hospital Road, Starkville, MS 39759.