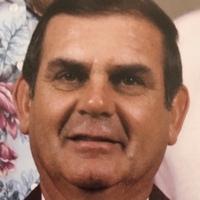 John Edward Gray, age 77 of Dorsey, Mississippi, left his earthly body, to go spend Christmas Day with the Lord Jesus on Friday, December 25, 2020, due to complications from a tractor accident. He was born to Octor and Bonita Loague Gray on August 25, 1943. He was married to the love of his life, Dianne White Gray, his "old lady" as he would jokingly call her, for almost 54 years. He loved the Lord, and he dearly loved his family. He was a life- long member of Hopewell Baptist Church where he served as a deacon. He was an avid conversationalist who loved to tell stories, laugh, and have a good time. Pulling pranks and jokes on his family and friends was something he did quite often. He was a retired sales manager for Toms Toasted Peanuts where he worked for forty two years. He was a charter member of the Dorsey Lions Club. His three grandchildren were the apple of his eye, and he was incredibly proud of all them. He loved talking about them to anyone who would listen. He was also blessed with a son-in-law (Lee) who he felt was more like a son. He loved sports and always attended ICC sporting events. He especially, loved anything that had to do with Ole Miss and sharing that passion with his daughter, Sandy. He loved playing basketball where he was known for his hook shot. He would constantly tell us no one could defend. He played at Itawamba Community College. He was drafted to the United States Army in 1967. There, he proudly served his country for two years, with a tour of duty in Vietnam.

He loved his farm, cows, and riding his tractor. Spending time outside was what he enjoyed the most. He was very particular about his yard, loved his flowers, fruit trees, and keeping everything looking nice.

He will definitely be remembered for his ability to be late for almost everything he attended and was often told he would be late for his own funeral. He would always remark "He hoped he would be". But most importantly, he was a strong, tender-hearted person. He was a good provider who never met a stranger.

He was preceded in death by his parents, Octor and Bonita Loague Gray, two brothers, Buster Gray and Jimmy Gray, and his brother-in-law, Homer Awtrey.

Graveside services will be at 2:00 p.m. Tuesday, December 29, at Hopewell Baptist Church Cemetery with Brother Jackie Gray officiating. McNeece-Morris Funeral Home is in charge of the arrangements. Friends and family are asked to please wear masks and practice social distancing.

To send a flower arrangement or to plant trees in memory of
John Edward Gray, please click here to visit our Sympathy Store.