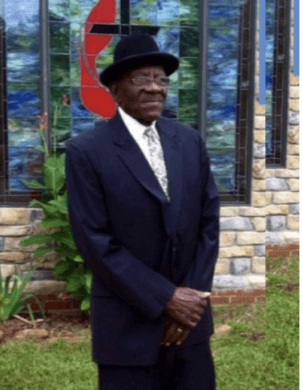 Lamar was born September 30, 1924 to the late Sonny and Estelle Sandlin Kimp in Pontotoc County. He was the first child born to this union. Lamar passed away on December 30, 2020 at his home in Pontotoc, MS.

Lamar confessed his hope in Christ at an early age and joined McDonald United Methodist Church. He remained faithful until the Covid Pandemic 2020. Thurston Lamar married the late Onnie Bell Kimp and to this union they shared two blessings; the late Dexter Kimp and Marilyn Kimp Miller. Lamar was a WW2 Veteran and served in the United States Navy. Later in life he became an entrepreneur. He opened one of the first Black Owned Dry Cleaners in Tupelo, MS. After closing, he came back to Pontotoc and worked at The City Cleaners for many years until he retired. Lamar, known as Boss Man in the working world, was a hardworking man because for many years he also worked as a Licensed Funeral Director for Naylor Chapel and then for Roberson Funeral Home until his retirement in 2012. During that time and before, he was the owner of KIMPS Kitchen. Lamar was a Masonic Brother with Garfield Lodge 61, a Concerned Citizen of Pontotoc, and a member of MLK Dream Committee.

He was affectionately called Papa by everyone. Papa loved being around his family and friends. He always had a beautiful smile to greet you with, a handshake, and possibly a pocket full of peppermints.