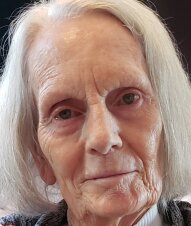 Jimmye Nell Dickerson Allen, 84, passed away in Tifton, GA on Saturday, January 2, 2021. She became a resident of GA and lived with her daughter, Angelique, and family for 6 months after her husband, Bascom Lee Allen, Sr. died. Jimmye and her husband Bascom were previous long-time residents of Starkville, MS for 47 years. Jimmye was born in Bruce, MS on January 19, 1936 at home to Ethelyn Gullick Dickerson and John Franklin (Bud) Dickerson. For a short period of time during WWII, she lived in Mobile, AL, due to father’s work. After Jimmye and family returned to Nettleton, MS, she later graduated from Nettleton High School as Salutatorian in 1954. Jimmye graduated from Itawamba Junior College in 1956 with an Associate of Science degree and with Honors from Mississippi State University on January 25, 1958 with a Bachelor of Science degree. While working as a secretary for Dr. D.W. Aiken, MSU Comptroller for the Registrar’s Office, Jimmye met Bascom in January 1958 when she gave him his entrance exams. Then, Bascom took Jimmye for coffee, and she was smitten not only because of his good looks, but also because he was ambitious, kind and considerate. They were married June 21, 1958 at First Methodist Church Sanctuary in Columbus, MS. Jimmye, Bascom, and son, Lee (born February 5, 1959), moved to New Orleans, LA in January 27, 1961. Jimmye soon became a happy mother of two children when Angel was born May 30, 1962. Bascom’s work moved them from LA to FL for a year, and then they settled in Bogalusa, LA in 1964. Besides being a homemaker, in 1967, Jimmye served as a social worker in Washington Parish, LA. Later, Jimmye began teaching at Central Memorial High School in Bogalusa, LA and then at Bogalusa High School teaching English and Science. The Allens became very active with the Christians meeting at the Church of Christ in Bogalusa, LA. In 1973, the family moved to Starkville, MS. Jimmye started at Henderson Jr. High teaching English. While teaching, she studied and received her Master of Science in Ed. in 1975. In March 1987, she received Teacher of the Month. Jimmye retired with Starkville Public Schools with 25 years of teaching in May 1994 and was awarded one of America’s Best Teachers in October 1994. During her teaching career, Jimmye was a member of the National Council of Teachers of English, the National Educators Assoc., MS Assoc. of Educators, Phi Delta Kappa, Kappa Kappa Iota, where she served on the education committee, and was secretary of the Starkville Public Schools Advisory Council. Jimmye also taught K/1st grade Bible classes at Starkville Church of Christ. She also participated in ministry with the University Christian Student Center Adoptive Parent Program (20+ years). Being an MSU alumnus with Bascom, they supported the MSU baseball team as adoptive parents with Coach Ron Polk in the 1990’s. She served in Kiwanis with her husband from 1974 -2015. Her service brought opportunities such as serving as First Lady with husband Bascom as Governor of MS/LA/West TN District (1998-1999) and working at Humphrey Coliseum during basketball games in concession stands to raise money for children. Jimmye also ran in several 10Ks. Jimmye loved reading, especially the Bible with her husband at the kitchen table. A favorite passage, Numbers 6:24-26, “The Lord Bless you and keep you; the Lord make his face to shine upon you and be gracious to you; the Lord lift up his countenance upon you and give you peace”. Jimmye was preceded in death by her parents, her husband, and mother, and father-in-law, Asenath Averine Wright Allen and Maxwell Carlyle Allen, Sr.; brother, Johnny C. Dickerson; brother-in-law, Maxwell C. Allen, Jr.; sister-in-law, Jean Dickerson; niece, Amy Dickerson; and other beloved relatives. She is survived by son, Bascom Lee Allen, Jr. ( Jan ) of Mt. Juliet, TN; daughter, Averine Angelique Allen Newsom (Larry) of Tifton, GA; two grandsons, Josh Allen (Brittany), of Nashville, TN; Brantley Newsom of Tifton, GA; three granddaughters, Hannah Allen Cupples ( Avery) of Hermitage, TN; Nicole Newsom Jacobik (Alexander) of Tallahassee, FL; Carly Anne Newsom of Carrollton, GA; two brothers Paul Dickerson of Smithville, MS; Mike Dickerson (Julie) of Nettleton, MS; sister-in-law, Anne W. Allen of Germantown, TN, and other beloved relatives. Family will celebrate her wonderful life at a private graveside service in Starkville, MS.