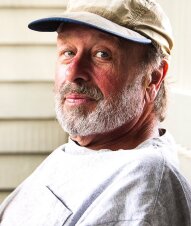 George Donald Miller, Jr., 64, passed away on January 8, 2021 in Starkville, MS. George worked at Mississippi State University for over 40 years, with the last 34 as a Research Associate in the Department of Sustainable Bioproducts (formerly the Forest Products Lab). He was committed to seeing that the students received the best education possible and wanted each one to be a success.

George was an avid MSU baseball fan and before the stadium renovation, he could always be found in the right field with his broom, waiting for the “clean sweep” of a series. He was also very passionate about caring for animals, particularly cats- whether they were his or the feral families he met along the way on his daily walks.

He was preceded in death by his parents, George D. Miller, Sr. and Elizabeth Fancher McKenzie; and his sister, Grace Marie Miller.

He is survived by his aunt, Martha Fancher and cousins. He will also be missed by his many friends who loved and cared for him.

A Celebration of Life will be held at a later date.