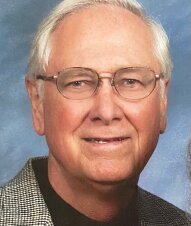 James Marion McReynolds, Jr. died peacefully at home surrounded by family on Friday, April 30, 2021, after a courageous battle with dementia. Born on August 29, 1932, to James Marion McReynolds, Sr. and Pauline Swan McReynolds in Evergreen, AL, he spent most of his life in Starkville, MS. A 1950 graduate of Starkville High School, in later years he enjoyed planning and hosting several class reunions. He went on to attend Mississippi State College (MSU), where he was a member of Sigma Chi Gamma Upsilon chapter serving as vice president and rush chairman. Establishing a legacy that includes 14 family members, he was a Life Loyal Sig enjoying fellowship with brothers through the years. Additionally, he was a member of the Scabbard and Blade Society and R.O.T.C, receiving his commission as a 2nd Lieutenant in the U.S. Army upon graduation. His service included time in Fort Benning, Fort Ord, and Korea. He took a carrier company to Korea and commanded a heavy weapons company while there. Returning to Starkville James visited Magruder dorm, the only girls’ dorm on the MSU campus at the time, where he was introduced to a “W” girl who was attending summer school. He told his sister he had met the girl he was going to marry, which he did the very next year! James and Gwendolyn Martin Bounds were married in Meridian, MS on June 28, 1958. After 3 years at Gaddis Farms in Bolton, MS, he returned to Starkville to manage JM McReynolds & Sons Registered Angus farm. In addition to raising breeding stock and bulls, he fitted and showed cattle to promote the Angus breed. He served as president of the Mississippi Angus Association and the Oktibbeha County Cattlemen’s Association.
Mr. McReynolds was also involved in the sale and distribution of Vermeer round hay balers, often making sales calls on his newly acquired motorcycle. Later, he fulfilled an aspiration to become a pilot, using this skill to fly to various locations to judge cattle shows and help young people learn the art of fitting and showing cattle. Ever adaptable, Mr. McReynolds was also a soybean farmer, a property management consultant, and the owner of R&M Tires in Starkville.
A faithful member of First Presbyterian Church of Starkville, MS for 63 years, James served as deacon and elder in various capacities through the years. He enjoyed traveling, golfing, dancing at Cotillion and Holidates functions, and fellowship with friends in dinner bridge and the Bulldog Supper Club. At age 51, he won his age group in the Mississippi Marathon and ran in the first Frostbite Half-Marathon in Starkville.

Funeral arrangements are being handled by Welch Funeral Home. A graveside service will be held on Friday, May 7, 2021 at 11 AM at Oddfellows Cemetery. Relatives and friends are welcome to attend.

Memorials may be made to First Presbyterian Church, Sigma Chi Foundation: Gamma Upsilon Fund, or a charity of your choice.

The family would like to thank Dr. Henry Edmondson and his staff at Laird Clinic, Dr. Chad Williams, Dr. Steven Brandon, Oktibbeha County Hospital, and Kindred Hospice, especially Wanda Johns and Polly Billups for their care of Mr. McReynolds.