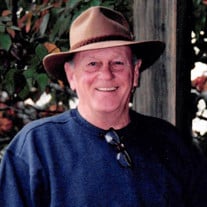 Henry Edward “Eddie” Wamble passed away Sunday, May 16th, 2021, surrounded by his family. Born in Wren, Mississippi on September 8th, 1937, Eddie was the son of Henry Edward and Mary Elizabeth Dollar Wamble and the brother of Sue Wamble Wax. In 1959, he married his beloved Eloise Jackson, and they were married for 51 years until her death September 26th, 2010. Eddie and Eloise lived their entire life in the Wren community on the same land where he was born. They raised four children, and he would say his greatest accomplishment was raising a loving family.

Eddie was a strong, hardworking, independent leader in his beloved community of Wren. He was an avid outdoorsman, farmer, successful businessman and Christian. He was an Elder and Clerk of Session at Wren Presbyterian Church where he was a lifelong member, dedicated to the maintenance, longevity and growth of the church. He was a lifetime board member of Old Union Cemetery and worked tirelessly to support and maintain historic WrenWoode. Eddie also contributed to the community by serving on the Amory School District Board representing Wren and volunteering with the Wren Fire Department. Inspired by his librarian mother, Eddie appreciated a good book, especially a Western. He also enjoyed cheering on
the Mississippi State University Bulldogs.

Eddie graduated from Wren High School in the class of 1955, where he was said to be a star basketball player. He attended Itawamba Community College after high school. As a young man, Eddie worked in several area furniture factories which led to his employment at Southern Duo-Fast on April 1st, 1966 where he retired December 30th, 1997. Eddie became the Sales Manager for all of Southern Duo-Fast areas in Mississippi in 1975. After retirement, he handled special situations when Southern Duo-Fast expanded into new states. He cherished lifelong friendships with many hunting and fishing buddies, his Southern Duo-Fast work family and members of the Wren community.

The Celebration of Life Service will be held at the Pickle Funeral Home in Amory on Thursday, May 20th at 2:00 p.m. with visitation beginning at 12:30 p.m., prior to the service. Burial will follow in Eddie’s beloved Old Union Cemetery in Wren. Memorials may be made to Old Union Cemetery, c/o Mabry Allison, 32696 Hwy 45 N, Okolona, MS 38860.