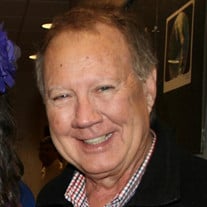 Ingomar-Billy Floyd Turner, 76, went to his heavenly home Monday, June 8, 2021. He was born September 23, 1944 to Floyd Hubert Turner and Zettie Mae Flaherty Turner. Mr. Turner, a Banking and Finance graduate of The University of Mississippi, worked in banking and insurance sales for many years. He was a Christian man of the Baptist faith. An avid Ole Miss fan, little pleased Bill more than hours spent with family and friends cheering on the Rebels. He also enjoyed walking the Rails to Trails in Ingomar, but his most loved pastime was spent with his grandchildren driving them around in his “Big Red” truck.
Visitation and funeral services for Mr. Turner will be held at United Funeral Service on Friday, June 11, 2021, with visitation from 11:00 to 1 p.m., and the funeral service immediately following.
He is survived by his two daughters, Misty Freeman (Chip) and Mandy Raines (Brad), one son, Zachary Turner, four grandchildren, Barrett Freeman, Ellison Clark Freeman, Savannah Raines, and John Michael Raines, and one sister, Janell Bird.
He is preceded in death by his parents and two sons, Michael Darren Turner and Martin Douglas Turner.
Pallbearers are Chip Freeman, Brad Raines, Barrett Freeman, Josh Smith, Jacob Smith, and Joel Smith. The honorary Pallbearer is John Michael Raines.
Fifteen years ago, Mr. Turner received the gift of life as a transplant recipient from the family of Paul H. Watson, III, for which his loved ones are forever grateful. For online condolences please visit www.unitedfuneralservice.com.

United Funeral Service is honored to be entrusted with these arrangements.