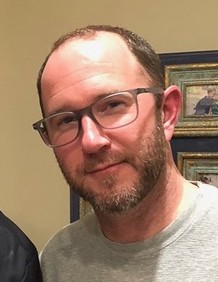 TUPELO – Peyton Carnes McCormack, 46, died Friday, June 11, 2021, in Amory.  A service of death and resurrection will be held at 11 AM Thursday June 17, 2021, at First United Methodist Church in Tupelo.  Visitation will be Thursday from 10 AM to service time at the Gathering Room.

Peyton will be fondly remembered by so many for his radiant smile, big laugh and compassionate heart. Peyton’s personality was infectious and the twinkle in his eye will stay with us in our hearts. Peyton, like his father, loved music, fishing, and a good story.  He had a love for learning, nature, photography, writing, sports, people, and places. If he could have chosen anywhere in the world to be, it would have been driving through the Mississippi Delta. He recently told a friend that his happiest days were in Marks, Mississippi. As mentioned, Peyton had a tremendous love of music, and he often said he probably had the most random collection of songs of anyone on the planet. Peyton loved children, especially his many nieces and nephews, and they loved him so much as well. He had a genuine love for books and reading as well as movies, old and new. Peyton loved cheering on the Ole Miss Rebels and the St. Louis Cardinals. He had also recently taken up an interest in cross stitching and was working on completing one of the Mona Lisa. Above all, Peyton’s proudest accomplishment was being Henry’s dad. He has said on numerous occasions to many people that he didn’t know what he had done to deserve such an incredible son. Peyton loved sharing his love of music, especially the songs he grew up loving, with Henry. They loved attending concerts, watching the latest Star Wars or Marvel movie together, fishing, camping, talking about any and everything, and being in each other’s presence.  His memory will continue to live on in our hearts.

Peyton is survived by his mother and stepfather, Pat and Frank Miller; two sisters, Meredith Meurrier (Michael) and Maggie Davenport (Zach); one son, Henry McCormack; step-mother, Macy McCormack; grandmother, Sis Long, many nieces and nephews, cousins, aunts, uncles and friends whom he would have considered family.

He is preceded in death by his father, Fred Carnes McCormack; grandfather, James W. Long; and grandparents, Fred and Virginia McCormack.  Holland Funeral Directors is entrusted with the arrangements.