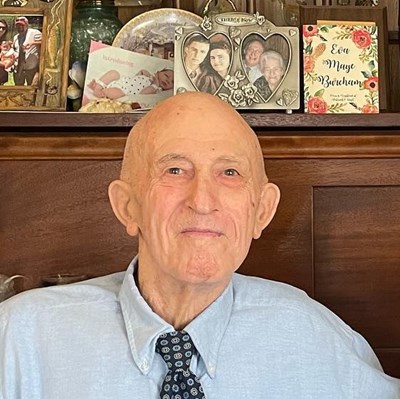 Hassell Tulon Holder, 95, died Tuesday, June 29, 2021, at home in Cairo after several months of declining health. Hassell was born in Cairo November 20, 1925, the oldest of four sons of Fred Owen Holder and Ola Blanche Jourdan Holder. He attended Burton School until January 30, 1943, when he quit school to marry his high school sweetheart, Maxine Engle. He was 17 in the 11th grade, and she was 16 in the 10th grade. It was a commitment for life. During WWII, he served in the U.S. Army’s 1259th Combat Engineers Battalion stationed at Camp Lucky Strike near Rouen, France. After the war, he and Maxine started their family, and between December 1946 and July 1956 they would have 3 sons and 3 daughters. At first, he tried his hand at farming but learning the hard way that the weather could make or break you in farming. He soon started a career as a heavy equipment operator that would last until he retired in the mid-1980s. He worked for the MS State Highway Department, TVA, Corps of Engineers, and various construction companies in Mississippi, Alabama, and Tennessee. After retirement, he started his search for his ancestors, without the aid of the internet, by exploring courthouse records and cemeteries in Mississippi, Alabama, and Tennessee. He was a past member of the Alcorn County Genealogy Society and was one of the charter members of the Tishomingo County Genealogy Society. Hassell was a member and Deacon of Little Flock Primitive Baptist Church. He was a member of the International Union of Equipment Operators and a member of VFW Post 4877, Booneville. His favorite pastime was fishing with his brother Marshal on the Tennessee River and with his great grandchildren at the Lowrey ponds.

Funeral service with Military Honors will be at McMillan Funeral Home, Booneville at 4:00 P.M. Thursday, with 2 hours visitation prior to start of funeral services. Brother Ricky Taylor will officiate with Ronnie Holder giving the eulogy. Burial will be in Holder Cemetery East at Burnsville. This is the family cemetery of his oldest known ancestor, Hawkins Holder who settle in that area in 1840. There will be no graveside service.