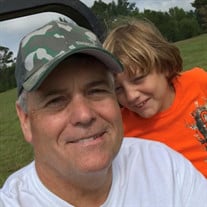 Starkville, Ms – Luke Reed, 13, passed away on August 4, 2021 in eastern Oktibbeha County. Luke was born November 5, 2007 in Starkville to Gina Dedeaux Reed and Tommy Reed. He was a student at Oak Hill Academy going into the 8th grade this year. Luke was a member of Faith Baptist Church.

Luke had an extremely compassionate heart for people. He loved helping and giving to others in need. One time he won a gun raffle that was raising money for a lady that was ill in the community. Instead of accepting the winning gun, he sold his ticket and gave the money to the person for which the raffle was being held. Luke was an avid Motor cross rider. When confronted by Coach Ferguson concerning playing football at Oak Hill, he simply said “I really like to ride my motorcycle”, to which Coach said that he could do both. Luke again said that he really liked to ride his motorcycle. Luke was very mechanically inclined being able to disassemble and reassemble anything to make it work. He enjoyed flying and learning to fly airplanes with his grandfather as well as driving tractors and doing farm stuff. He loved operating remote controlled cars with his brother Lane.

Funeral services will be Thursday, August 12, 2021 at 2:00 PM from Calvary Baptist Church in West Point, MS. with Reverend Jim Garner officiating and assisted by Brother Ben Yarber. Burial will follow in Memorial Gardens in West Point. Calvert Funeral Home of West Point is in charge of the arrangements.

Honorary Pallbearers are Marty McDaniel and B. J. Johnson.

In lieu of flowers, memorials may be made to St. Jude Children’s Research Hospital, 501 St. Jude Place, Memphis, TN 38105 or to a Charity of Choice.