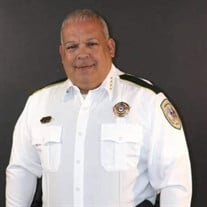 Mark Douglas Fulco, age 50, of Water Valley, MS died unexpectedly Monday, August 9, 2021, at Baptist Memorial Hospital in Southaven, MS. He was born June 18, 1971, in Tupelo, MS to Edna Rawson and the late Camille J. Fulco. Not long after finishing high school, Mark started studying law enforcement and entered into life long public service. With over twenty certifications and accreditations, he had a hunger for gaining new knowledge in his field. Mark started his law enforcement career in 1991 with the Union County Sheriffs department in El Dorado, Arkansas. Later he moved to Mississippi and worked with five other departments until starting with the MDOT in 2003. During his time with the MDOT, he served as a member of the Honor/Color guard. He remained at this post until becoming the Sheriff of Yalobusha County. As work was his life, he was known to be a work-aholic. But when he did manage to take some time for himself, he enjoyed working with metal, welding and fabricating things for himself and others, often giving those works away.

Mark will lie in state in the Henry Chapel at Seven Oaks Funeral Home, Friday, August 13, 2021 from 1:00 PM until 8:00 PM. Due to Covid concerns, the family has opted to hold a private service.

Mark was preceded in death by his father.