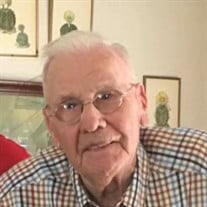 West Point, MS – J.C. Bailey, 99, passed away on August 16, 2021 at North Mississippi Medical Center in West Point. He was born December 5, 1921 in Calhoun County to Etta Pettit and Tom Bailey. He was a Foreman at Bryan Foods in the Ham-Boning Division for 34 years and was a member of First Baptist Church. Mr. Bailey had lived in West Point since 1949.

Mr. Bailey was a very loving husband, father and grandfather who was humbled by being a great provider for his family. He was a self-made man that loved to fish and work in his garden. Being tenacious as he was, Mr Bailey worked his garden himself up to the age of 95. He lived a full life and will surely be missed by all.

Survivors include his daughters, Betty Jean Oswalt of West Point and Joann Burns of Batesville; his sons, H.C. Bailey (Judy) of Forrest and Danny Bailey (Theresa) of West Point; numerous grandchildren and great grandchildren. Preceding him in death were his parents; his wife, Ruth B. Bailey; two sisters, Modess Dye and Lillian Beila; one brother, Winford Bailey.

Visitation will be one hour prior to service.

Memorials may be made to charity of choice.