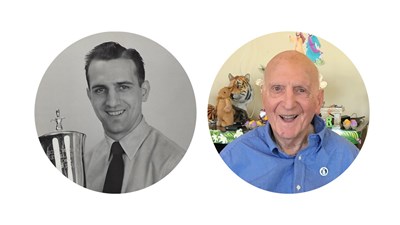 Leonard Arthur Dearman, a native of Pontotoc, MS and long-time resident of Gonzales, LA, died peacefully at 5:39 p.m. on August 16, 2021, at the age of 89, surrounded by his sons and caregivers at Magnolia Assisted Living in Gonzales.

Leonard worked in the chemical industry for nearly 40 years before retiring as a production manager with Triad Chemical in Donaldsonville, LA. He was a 1951 graduate of Algoma High School and proudly served in the United States Air Force from 1951-1955, stationed in Wiesbaden, Germany. He cherished his time in the military, serving abroad and received an honorable discharge as Staff Sergeant. He loved the sport of basketball, playing in high school and serving as player/coach of the 18th Weather Squadron team in Germany, and dedicated many years coaching youth sports with his sons. While stationed in Europe, he met his wife, Rosemarie Klings of Berlin, Germany. They married on April 22, 1956 in Smyrna, GA, and settled in Memphis, TN, where they adopted their two sons. They relocated to southern California in 1967 before finally settling in Gonzales, LA in 1969.

Visitation will be held at Browning Funeral Home, 141 W. Oxford Street, Pontotoc, MS on Saturday August 21, 2021 from 8:30 – 10:00 a.m., with Funeral services following in the Browning Chapel. Burial immediately after at Pontotoc Memorial Gardens.

Pallbearers will be his two sons and four grandsons.

The family would like to express their most sincere gratitude and thanks to Dr. John Fraiche, Tasneem Harry, his sitter and angel caregiver of three years, Tammy Duhon and the entire staff at Magnolia Assisted Living for their care and support, and Nurse Paulette Edmonston and Clarity Hospice for their wonderful compassion and care throughout.