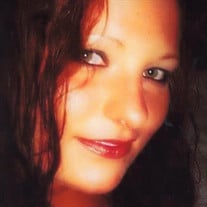 Kimberly Jo Russell, 34, went to her heavenly home on Monday August 23, 2021, after a long and difficult battle with her health. She was born July 4, 1987 to Betty Foster Jarvis and her biological father, Rowland Atwood. Then, at age 2, Kimberly was adopted and raised by James S. Russell.
The last five years of her life, she came to know and love her bonus dad, Jeffery F. Jarvis to whom she lovingly referred to as her “Pops.”
She was a 2005 graduate of Myrtle Attendance Center. After graduating she went to work for Ashely Furniture Company in Ecru until her health failed her. Kimberly enjoyed sewing and painting as a favorite pastime. She was a kind and gentle spirit and gave a lot of her time to help others. She will be greatly missed by her family and friends.
Services for Kimberly will be 2:00pm Saturday, August 28, 2021 at United Funeral Service with Bro. Eugene Stockstill officiating. Visitation will be from 12 noon till the start of the service at 2:00, also at United. Burial will be at Glenfield Memorial Park.
She is survived by her parents, her adopted father, James Russell, her bonus dad, Jeff Jarvis; two sisters, Audri Russell of New Albany and Michelle Stokes of Pontotoc; two brothers, Brady Russell and Charley Hall, both of New Albany; grandparents Peggy Russell, Ronnie and Deborah Jarvis, and Robert and Charlotte Foster.
She is preceded in death by her grandfather Robert Owen Russell.
For online condolences please visit www.unitedfuneralservice.com United Funeral Service is honored to be entrusted with these arrangements.