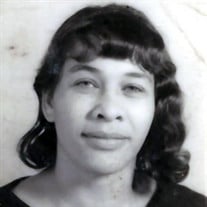 On July 6, 1937, Amos and Louella (Brown) Hervey were blessed with their second daughter — Daliah Zenobia — born in Coffeeville (Yalobusha County) Mississippi. She peacefully departed this life on Thursday, August 26, 2021, at her home located in Water Valley, Mississippi.

Mrs. McLeod made a commitment to Christ at an early age and joined Rocky Mountain Missionary Baptist Church. She was a dedicated and faithful member until Wednesday, October 22, 2008, when she was seriously injured in a car accident on Highway 7 South enroute to her Bible Study class. After a lengthy recovery, Mrs. McLeod returned to her church and worshipped faithfully. As circumstances would have it and with other underlying medical conditions, she became homebound until her death.
At the age of six (6), Mrs. McLeod was enrolled in the Rocky Mountain Church School where she completed first and second grades. Schools were consolidated and the remainder of her education was completed at Coffeeville Colored High School where she graduated in 1957. In the fall of 1957, she entered Mississippi Industrial College in Holly Springs, Mississippi where she received a BS Degree in Elementary Education in 1961. Immediately after graduation, she was employed by the Water Valley School System and worked at the Davidson Elementary School. She worked for the Water Valley School System for thirty-eight (38) years. During that time, she held several positions and retired in 1997 as the Assistant Principal at Water Valley Elementary School, which is now Davidson Elementary School. Even after her retirement, she served as a long-term substitute for a teacher on maternity leave.
On August 3, 1961, she became the bride of her soulmate and the love of her life, Butler McLeod. They met during their college years and that love lasted for sixty (60) years. They were blessed with one son and two daughters.
At her church, Rocky Mountain, Mrs. McLeod served as Sunday School teacher and the church treasurer as well as in any other position where she was needed. She also participated in activities held by the Mt. Moriah District Association. She was active in her community and served on the Water Valley Housing Authority Board, served as a member of the Water Valley Library Board, was a member of the Davidson School Reunion Committee of 1988, served as Grand Marshal for the Water Valley Christmas Parade in 2019 along with her husband, and was honored with a Northwest Mississippi Community College Scholarship endowed in the name of Butler and Daliah McLeod on July 18, 2019 to commemorate their many faithful years in education. Mrs. McLeod was very creative and did decorations for school events, proms, other school systems, church events, etc. She could create unimaginable drawings for any scene that was suggested. She was also a member of the Heroines of Jericho.
Precious memories are left with her loving husband, Butler McLeod; one son, Rodrick (Patsy) McLeod all of Water Valley; two daughters, Detra (Barron) Matthews of Water Valley, and Vietta (Richard) Booker of Oxford; eight (8) grandchildren; nine (9) great grandchildren; one brother, Edward Hervey of Michigan City, Indiana; one sister, Grace (Willie) Hardy of Memphis, Tennessee; a host of nieces, nephews, and cousins. One grandson, Rodrick McLeod, Jr. (July 29, 2012); two sisters, Rachel Duke (May 16, 1982) and Edith McNeal (March 5, 2006); two brothers, Prentiss Hervey (February 19, 1994) and Elbert Hervey (June 6, 2017) preceded her in death.
“For if we live, we live to the Lord, and if we die, we die to the Lord. So then, whether we live or whether we die, we are the Lord’s.”
Romans 14:8 (NIV)