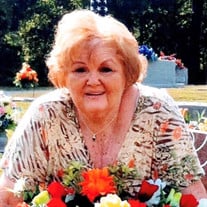 Robbie grew up an only child who was loved and adored by her parents and extended family. She was a charismatic soul, with fiery red hair, who always brought life into a room. Robbie married the love of her life, Duel Ray Strawbridge, on August 14, 1954, and they journeyed through life for 58 years together. They were blessed by God with four daughters and many grandchildren and great grandchildren.

She worked in many positions to help her husband support the family. Robbie was a CNA, a Professional Nail Salon Tech, a Hair Dresser, a Restaurant Owner, a Hotel Manager, and lastly but most importantly a Professional Musician. God gave her a wonderful talent and she could play just about any instrument by ear. Robbie was also a wonderful vocalist and during her lifetime, she had the privilege to perform with Charley Pride, David Thompson, Hank Thompson, Dolly Parton, Hayden Thompson, Hank Williams, Jr., Johnny Cash, and Marty Haggard.

Her Lord and her family were the most important things to her in her life. She was a member of Sonrise Baptist Church where she was a vocalist and pianist. Her main form of worship was through music which would move anyone to an enlightened place. Robbie was a member of the Victory Quartet where at times their harmonizing voices could make chills run down your spine. She was an organizer of many musical events across many states including Mississippi, Illinois, and Missouri.

Robbie never met a stranger and was a great cook and hostess and always had a perfectly decorated home. Some of her close friends, with whom she shared many memories, were Ann Jones, Hilda Cline, and Jeanette Mayes. At times, she could be quick witted, perhaps a little comical, and definitely not afraid to stand up for what she knew or believed. She always was kind and considerate to others yet she had great wisdom which she didn’t mind sharing.

Her family and friends are grateful to God for the many wonderful years with Robbie. She touched so many lives and moved so many people with talent God gave her. All that knew her, have confidence that she is now making beautiful music for her Savior.

In addition to her parents, she was preceded in death by her husband, Duel; daughter, Sharon Strawbridge; ad a son-in-law, Michael Sweeney, Sr.

The family would like to offer a special thanks to NMMC Hospice Nurse Amanda for all her wonderful care shown to Robbie.