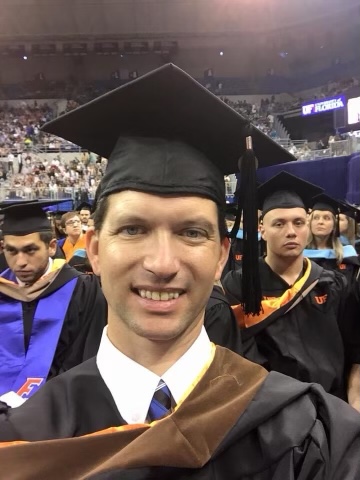 Collierville, Tn/Tupelo-Michael Lee Wilson, 44, devoted his life to a love of music and the education of those inspired by music. After a lengthy multi- year struggle with Leukemia, Michael met his Creator on Thursday, August 26, 2021 from M. D. Anderson Medical Center in Houston, Tx.  He was born on April 28, 1977 in Tupelo to parents who loved him deeply, Herman Lee and Joyce Barkley Wilson. He grew up here and met Jesus as a youngster attending East Heights Baptist Church.  Michael attended the public schools and graduated from Tupelo High School in l995 where his budding love of music made him a prominent member of the award winning THS Band under the director of Floyd Stevens.   Michael obtained a BA in Music Education from Delta State University after attending and playing in the Northeast Miss. Community College Band under the direction of Ricky Bishop.  His first teaching and band directing job was 2 years at Shannon High School.  He furthered his education at the University of Florida where he obtained his MA Degree in Music.  Michael was a part of the famous Southwind and Phantom Regiment Drum and Bugle Corps where he excelled at the Mellophone  (marching French horn).   He has spent the last two plus decades as Assistant Director of the Houston High School and Band Director of Collierville and Milan High School, all in Tennessee.   His bands won many competitions, excelled in every level of band performance and always enjoyed his vibrant personality and musical skills.  Many went on to secure scholarship to colleges across the Mid-south.  Michael was an avid star wars fan, liked watching sports especially SEC sports and was a big Florida Gators fan.  Although his life was way too brief, he made a wonderful contribution to the lives of his family, his students and the love of music.

A memorial service to celebrate his life will be held at 6 PM Thursday, Sept. 2, 2021 at the Tupelo Chapel of Holland Funeral Directors with Pastor Rob Armstrong officiating and Ricky Bishop delivering the eulogy.  Visitation will be from 5 PM-service time on Thursday, all at Holland-Tupelo chapel which is honored to be serving their friends. For those unable to attend, the service may be viewed at www.hollandfuneraldirectors.com/Livestreaming at 6 pm and permanently archived thereafter.

Michael is survived by his wife, Janye Marie Long Wilson and his children, Kaiden Lee Wilson and Eden Marie Wilson all of Rossville, Tn;  his mom and dad, Herman and Joyce Wilson of Plantersville; his sister, Angela Wilson Matthews and her husband, James “Punkin” Matthews of Plantersville; his nieces, Allie Matthrews Abell (Trenton) and Erin Leigh Matthews and a nephews, Tripp Matthews (Ashlee).,  several aunts and uncles including Peggy James, Kathy Peters, Betty Jean Johnson, Howard Wilson and Tildon Barkely and many cousins and other relatives and many friends everywhere.

The family would ask as a tribute to Michael that you consider becoming a bone marrow donor for those dealing with cancer.  To learn more, go to https://bonemarrow.org/ or donate to the Bone Marrow & Cancer Foundation, 515 Madison Avenue, Suite 1130 , New York, New York 10022

A Memorial Tree was planted for Michael