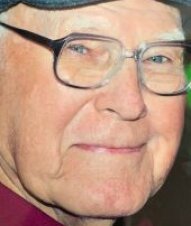 Mr. Shurlds was born January 16, 1926, and was known affectionately in his native Holmes County, MS by his childhood nickname, Sugarboy. After proudly serving his country in the United States Navy during World War II, he graduated from Yale University in Civil Engineering and Mississippi State University with a Master’s degree in Mathematics. Mr. Shurlds was a long-time Mississippi educator who taught in the mathematics department at Mississippi State University, as well as at public schools in Tchula and Vaiden.

The great loves of his life were his wife, children and their spouses, grandchildren and great-grandchildren, students, friends, church, and home. Mr. Shurlds faithfully served Maben United Methodist Church as lay leader and Sunday School teacher into his 90s. He enjoyed following Mississippi State sports, especially baseball, and was an accomplished gardener and fisherman. Mr. Shurlds became a close friend of Mr. Georges Remy of Verneuil-sur-Seine, France, who arranged the funeral service for his brother during World War II. He also enjoyed the friendship of the gentlemen who flew with his brother during the war, especially Lt. Roddey S. Ellis, Jr. The rich and remarkable life of Mr. Shurlds is well-documented in his autobiography, Memories, and a book signing was held to celebrate its publication.

A special thanks is extended to Donna and Elizabeth Shurlds for their loving care and attention provided for many years.

The visitation will begin at Maben United Methodist Church at 9:00 a.m. on Thursday, September 30th followed by the funeral service at 11:00 a.m., officiated by Rev. Rodney Glover. Committal services will be at Maben Memorial Gardens.