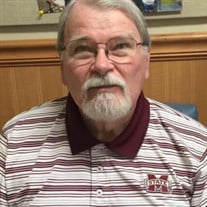 Mr. Joseph C. "Joe" Hurst, 76, passed away Friday, October 15, 2021 at his residence in West Point. Joe was born November 25, 1944 at Moody Field Army Air Force Base near Valdosta, Georgia, the son of the late Grover C. and Lena Wilhite Hurst. He was employed by Babcock & Wilcox in West Point for 38 years working as a Certified Manufacturing Engineer in the field of Production and Inventory Control.

In addition to his parents, he was preceded in death by the mother of their children; Judith Hurst, one sister; Ann Hurst Cummings and one brother; James (Bud) Hurst.

Honorary Pallbearers will be Bobbie Graham, WPHS Class of "62", Friends and Co-Workers at Babcock & Wilcox, and Clovis Duncan.

Memorials may be made to St. Jude Childrens Research Hospital, 262 Danny Thomas Pl., Memphis, TN 38105 or to the donor’s choice.