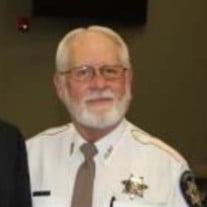 Constable Charles Lewis Stafford, Jr., 69, passed away on October 20, 2021 at his residence in West Point. Lewis was born on March 7, 1952, in West Point, the son of the late Charles Lewis, Sr. and Marguerite Edwards Stafford. Lewis graduated from West Point High School in 1970. After high school, he attended Mississippi State University, where he had received a baseball scholarship. He forewent his scholarship to join the Mississippi Army National Guard in 1971 and served for 12 years. In 1973, he joined the Mississippi Highway Patrol, served for 10 years and served as Vice-President of his class. In 1992, he served the Clay County Sheriff’s Department as the Chief Investigator. In 1996, he started working for the Mississippi Department of Corrections where he worked for 12 years. In 2007, he was elected as Constable with the Clay County Sheriff's Department where he was still serving and was the Vice President of the Mississippi Constable Association. He took great pride in serving and protecting the citizens of Clay Coumty. He enjoyed riding his motorcycle, hunting, and especially sharing memes on Facebook. He was a professional barter that would buy, sale, or trade anything. He loved his family, especially his grandchildren, friends, and his canine companion Rambo. In the early morning, Lewis could be found sitting on his front porch drinking his coffee. He married Martha Gail McKee Stafford on February 17, 1996. He was a loving husband, father, grandfather, brother, and friend. He was of the Baptist faith.

Memorials may be made to LeBonheur Children's Hospital, 848 Adams Avenue, Memphis, TN 38103 or to the Charity of Choice.