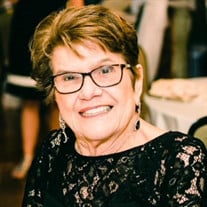 Shirley Ruth Cole, 73, passed away Saturday, October 23, 2021, at North Mississippi Medical Center. She was born November 9, 1947, to L. H. “Tate” Oakley and Henrietta Yates Oakley. Shirley was an active member of Booneville First United Methodist Church where she served various roles of the children’s ministry, including Sunday School Superintendent, Bible study leader and Nursery Supervisor.
Shirley’s greatest joy was her family, especially her grandchildren. She had a genuine smile and a contagious laugh. Although Halloween, Christmas, and Fourth of July at her house were special occasions, she celebrated every family dinner like a holiday.
She was a member of her beloved Booneville High School Class of 1965. She attended Mississippi State University and graduated from Blue Mountain College. She worked as a fourth grade teacher, Deputy Chancery Clerk, and a Title Abstractor in North Mississippi. She was passionate in her many careers and was a true jack of all trades. Her hard work ethic took her all over, making friends everywhere she went.
Visitation will be Tuesday, October 26, 2021, from 4:00 PM until 8:00 PM at Booneville Funeral Home. Funeral service for Mrs. Shirley will be Wednesday, October 27, 2021, at 11:00 AM in the Chapel of Booneville Funeral Home. Visitation, prior to service, will be from 9:00 AM until service time on Wednesday. Bro. Bobby Hankins and Bro. Tim Sisk officiating. A private graveside service will be held immediately after at Jumpertown Cemetery. Booneville Funeral is in charge of arrangements.
She is survived by her husband of 54 years, Phillip Cole; her daughters, Amy Cole Williams (Tim) of Tupelo and Molly Cole Michael (Jason) of Booneville; sister, Charlotte Oakley Whitehead (Ron) of Booneville; mother-in-law, Inez Cole; four grandchildren, Anna Claire Lothorp Brock (Brakston) of Stillwater, Oklahoma, Cole Lothorp of Tupelo, Katie Michael and Caroline Michael both of Booneville; a host of special nieces and nephews.
She was preceded in death by her parents and her sister, Frances Oakley Green.
Pallbearers will be Eric Cole, Johnny Duncan, Billy Gillespie, Preston Jones, Larry Michael and Barry Raines.
Honorary pallbearers will be Dustin Black, Travis Childers, Dustin Cole, Jordan Gann, Charles Googe, John Hatcher, John Haynes, Trent Jacobs, Steve Morgan, Charles Pollard, Bubba Pounds, Donny Prince, Kenny Robinson, Keith Shackelford, Brandon Walker, Chris Wildmon, Russell Whitehead and the Deputies of the Prentiss County Chancery Clerks Office.
Memorials may be made to the American Lung Association or to any charity of your choice.