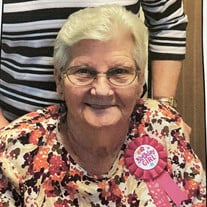 Sara "Bitsy" Weaver, 93, passed away on November 23, 2021 at Dugan Memorial Home in West Point. Bitsy was born on December 9, 1927, in West Point, the daughter of the late Allen and Louise Jordan. Bitsy worked as a Inspector for Artex, International from 1967 until her retirement. She served Calvert Funeral Home for 50 plus years in different capacities. In 1996, when they opened in their current location, she became their full time hostess and served until her retirement in March 2017. She was a past member of the VFW Ladies Auxiliary and the #53 Order of the Eastern Star Columbus Chapter. She was a faithful member of First United Methodist Church in West Point until her health declined. She enjoyed trips to Philadelphia and playing Bingo. She married Ross Weaver on May 27, 1983 in West Point and he preceded her in death on November 9, 1995.

In addition to her parents and husband, she was preceded in death by a son, Bob Butler, grandson, Christopher Tedford, sister, Dot Johnson, and brother, William "Billy" Jordan.

Graveside services will be on Friday, November 26, 2021 at 11:00 A.M. at Greenwood Cemetery in West Point with Reverend Darian Duckworth officiating. Calvert Funeral Home of West Point is honored to be entrusted with the arrangements.

Pallbearers will be the Staff of Calvert Funeral Home.

Honorary Pallbearers will be the Staff at Dugan Memorial Home.