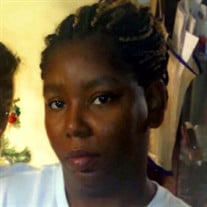 Katrina Barr was born September 18, 1980 to Ruby Jean (Hervey) Barr and the late Willie Lee Barr. Katrina was the youngest of three girls. She departed this earth December 3, 2021 at her home in Oxford, MS surrounded by family and friends. Katrina accepted Christ into her life at the age of twelve, but at the time of her death did not have a church home.

She married Marcus Morgan in June of 2012 and, even though they had no children of their own, they raised Katrina’s together. Katrina was know to be the family jokester, always pulling something silly to keep everyone on their toes. She had worked at South Panola schools in the cafeteria and was well liked by the students. Her last job before her illness was at Castle Hill east of Oxford. She had a tender and loving heart and was friendly towards people. But nothing meant more to her than her family, especially family gatherings where she could love on the children.

A wake is planned for Friday, December 10, 2021, in the Henry Chapel at Seven Oaks Funeral Home from 11:00 AM until 12:00 PM. Services will immediately follow at 12:00 PM with Rev. Cleveland Alexander officiating. Burial will be in Mount Hope Cemetery in Taylor, MS.