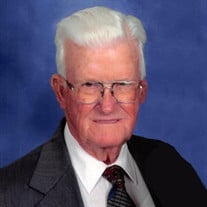 Dick was all things Smithville, having been born there, attended school there and lived there his whole life. He graduated from Smithville High School and entered in to United States Military, serving during the Korean War in the US Army and later enrolling in the MS Army National Guard. After serving in the Army, he began working as a Postal Clerk in Smithville as well as in Tupelo. Through the years, he made many friendships with the citizens of Smithville and the surrounding Monroe County. In addition to the Postal service, during his whole life, he worked on the family farm and worked in the transportation industry.

He loved the Lord and his family. He married the love of his life, Edna Franklin Cox, on November 11, 1993, and they enjoyed over 27 years of marriage together. They liked to travel together and just be around family. Some of Dick’s fellow church members at Smithville Methodist Church, were also like family to him. He served as a lay leader at one time, also served on the Board, and he loved to sing Gospel. He really enjoyed gathering and eating with the men’s Methodist Breakfast Club. Dick at times could have a very dry sense of humor, yet he was good as gold to the core, being very generous and kind. He had great commitment and gave service to God’s church.

He enjoyed all things out doors, especially gardening, and he lived a long and happy life. He and his wife, were very involved with “Keep Monroe County Beautiful” organization. Dick was patriotic, had great respect for fellow Veterans and he was a lifelong member of the American Legion.
Dick will be missed dearly by his family and friends, who will no doubt cherish all the great memories made through the years with him.

He is survived by his sister, Beverly McFadden (Charles), Hot Springs, AR; sister-in-law, Geneva Cox; a host of nieces and nephews.

In addition to his parents, he was preceded in death by his loving wife, Edna Cox; three brothers and their wives, Terrell Cox, Jr. (Thelma), Jesse Cox (Nell), and George W. Cox.

A Memorial Service was held on Saturday, January 8, 2022 at Smithville Methodist Church.

It is requested that memorials be made to The Smithville United Methodist Church, Smithville, MS.